Traffic Regulation Order (TRO) CHS9038RC is open for objections and comments from the public until the close of its consultation period on the 5th August 2021. If you feel these points are worthy of consideration by WSCC, please write to them expressing your views.

Thomas Jarvis (of Haywards Heath) has kindly provided ChiCycle with a detailed assessment of where WSCC proposals at this junction (and surrounding roads) could be improved.  A great many comments included in this post are based on Thomas’ keen eyed observations. Thomas ventures all around the South East on a bike and is eager to see good quality cycle infrastructure delivered throughout the county.

ChiCycle believe that space is available at the Westgate/Orchard-St junction to make good quality improvements to suit both pedestrians and cyclists. However, in our opinion, the current proposals still require additional polish to meet current UK standards.

There are several options for making objections or comments over this Traffic Regulation Order (TRO) CHS9038RC consultation process. You may:

These comments are also available in PDF format on this link.

The main issue I have with the proposed crossing is that Parallel crossings are meant to be used when there is a cycle route off of the road, and not used to switch sides for cycle provision.

Here it is just seemed to be used to allow southbound cyclists to switch to the shared cycle/footway on the other side of the road.

Would be better if it was located just to the south to provide a crossing where the PRoW (Public Right of Way)joins/leaves the road. If this footpath was converted to allow bicycles (although at the moment there is nothing legally preventing bicycles), then it would fulfil the designed purpose of parallel crossings.

Another issue I have with it is the two-lane approach northbound. Since this reduces to one lane just the other side of the crossing, I don’t see why this could [not] be reduced to one lane prior to the crossing.

Two lane approaches to zebra or parallel crossings should be avoided as drivers may have visibility severely impacted by adjacent vehicles. Also this would provide a wider refuge for pedestrians and bicycles from 2.5m (on drawing but labelled as 2m?) up to 4.3m, although only 3m is needed [3m is required by DfT standards MR].
There should also be cycle ingress from the carriageway via dropped kerb before the crossing. 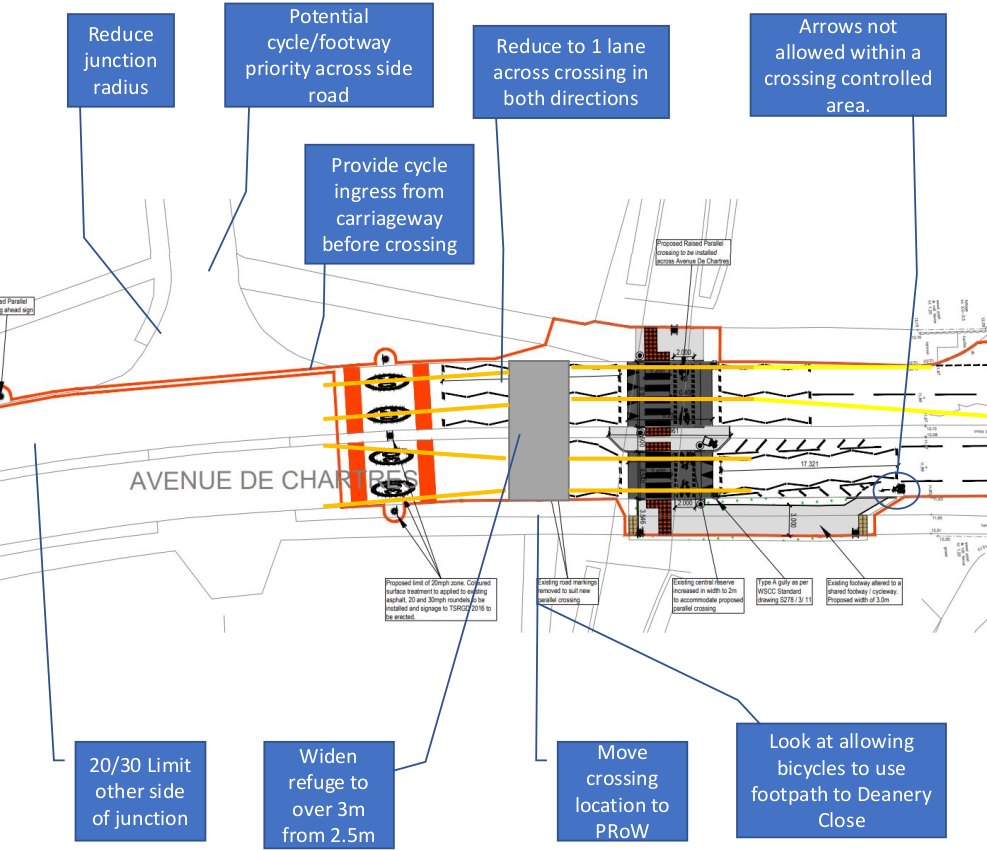 This part of the works are okay (see image below).

Although if the northbound carriageway is reduced to a single lane then alterations would have to be made around the bus stop, potentially putting it into a lay-by.

Also reduction in the side road radius would reduce the speed and therefore risk to pedestrians and cyclists using the shared use path. Potentially continues footway/cycleway treatment could be given in these situations to further reduce speed.

Reducing to a single lane sooner would also give more space on the shared cycle/footway, reducing conflict between pedestrians and cyclists.

There is lack of works being done to reduce conflict between cyclists and
busses/coaches pulling out of layby. Potentially mirrors could be provided to allow buses to check for cyclists (in the cycle lane blind spot).

This plan also seems to omit the parking restrictions on the southbound carriageway between the zigzags and bus/coach parking lay-by. 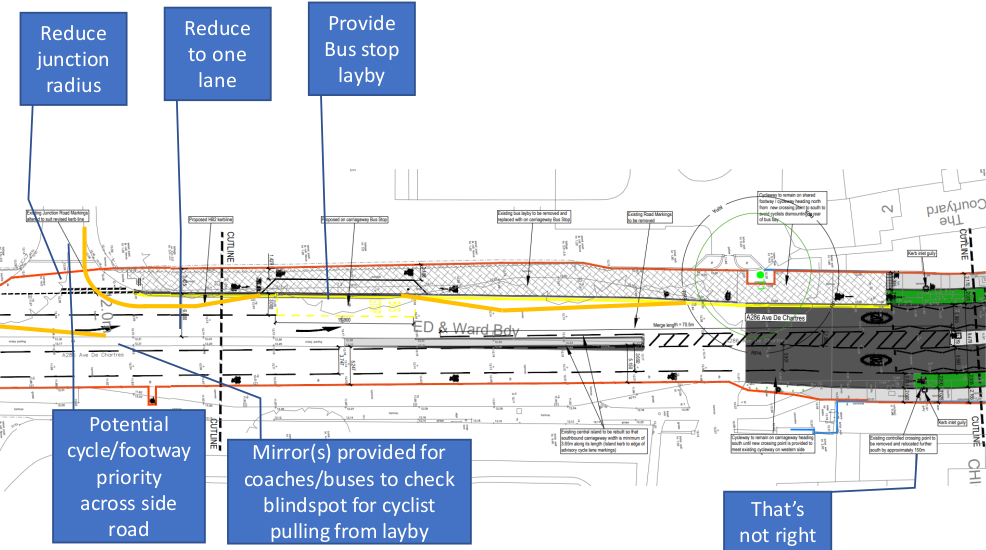 On the roundabout itself (see image below) there are many issues.

On all arms the cycleway has no segregation from the main carriageway. This poses three main issues.

The first one is that pedestrians have no refuge between crossing motor traffic arms, and the cycle track.

Adding the refuge in would reduce wait times for cyclists and motor traffic as well as providing a safer crossing for pedestrians.

Also cyclists waiting to join the cycleway roundabout would be stopped over the pedestrian crossing.

Adding segregation in would lengthen the cycleway exit/entry allowing one bicycle to wait without holding up others or blocking the pedestrian crossing. If segregation isn’t possible, the cycleway should widen on approach to provide an
“exit” lane and a continue lane. See below for example.

Third issue is that it results in incorrect markings as having a “giveway” markings between the pedestrians and cycle parts of parallel crossing. This is not allowed and would make the crossing invalid in terms of enforceability in law, unless an exception was granted by DoT.

Where segregation allows, it should be done.

The North Walls arm is done very badly. Due to physical constraints its not exactly easy to come up with a solution. I’d consider just making the whole arms a shared space between pedestrians, cyclists and motor vehicles with the cycle track being the only thing marked through it. There isn’t enough room there to do anything properly, so its better to not formally mark it all out except the cycle track.

The access to No 1 Orchard Street is very poor. Private accesses of roundabouts aren’t great in any situation, however here there is no capability to turn around off-highway, so the current design suggest that access is forward with reversing out back onto the roundabout. This should be the other way around with access into in reverse gear and entering the roundabout in a forward gear. Also priority isn’t clear across the cycleway here.
Other issues are minor, The loading layby on West Street is partly within the crossing controlled area. The Zigzags should be reduced so they don’t overlap.

Again there are arrows on the cycleways within the crossing controlled areas, this isn’t allowed either. 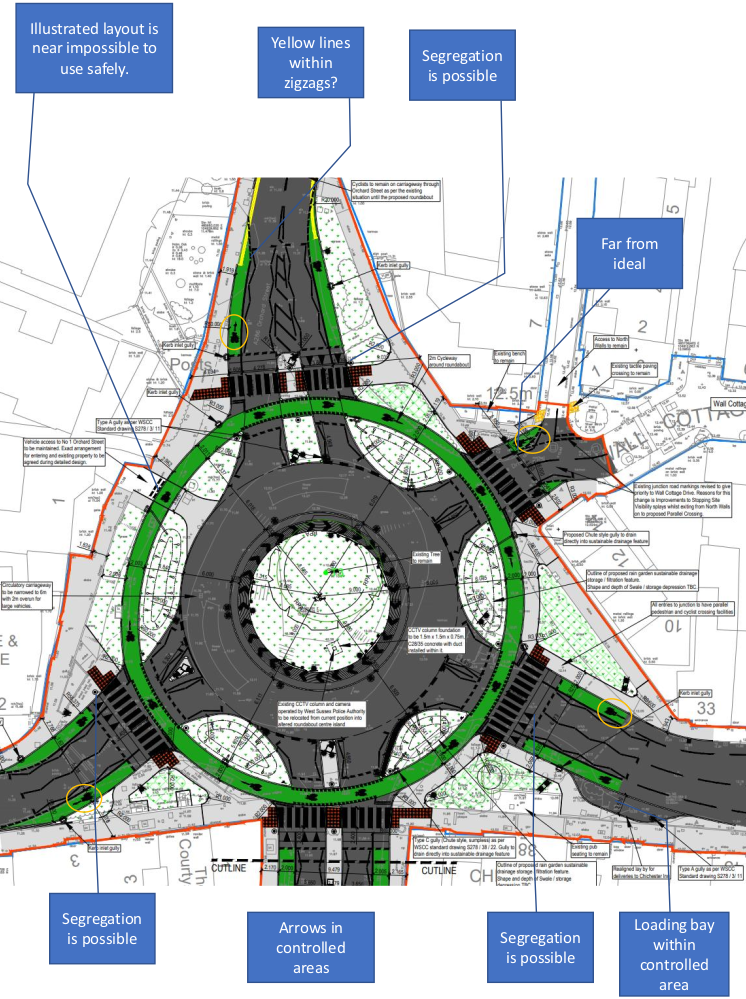 ChiCycle are particularly concerned about the proposed cycle lane exiting the roundabout, heading North Eastwards on Orchard St. The cycle lane rapidly tapers down to near zero width and it is not clear what cyclists are expected to do? Presumably the cycle lane is flush with the road and forms part of the carriageway. In this case use of arrow symbol 1059 is not permitted because it is placed inside the crossing controlled zone. 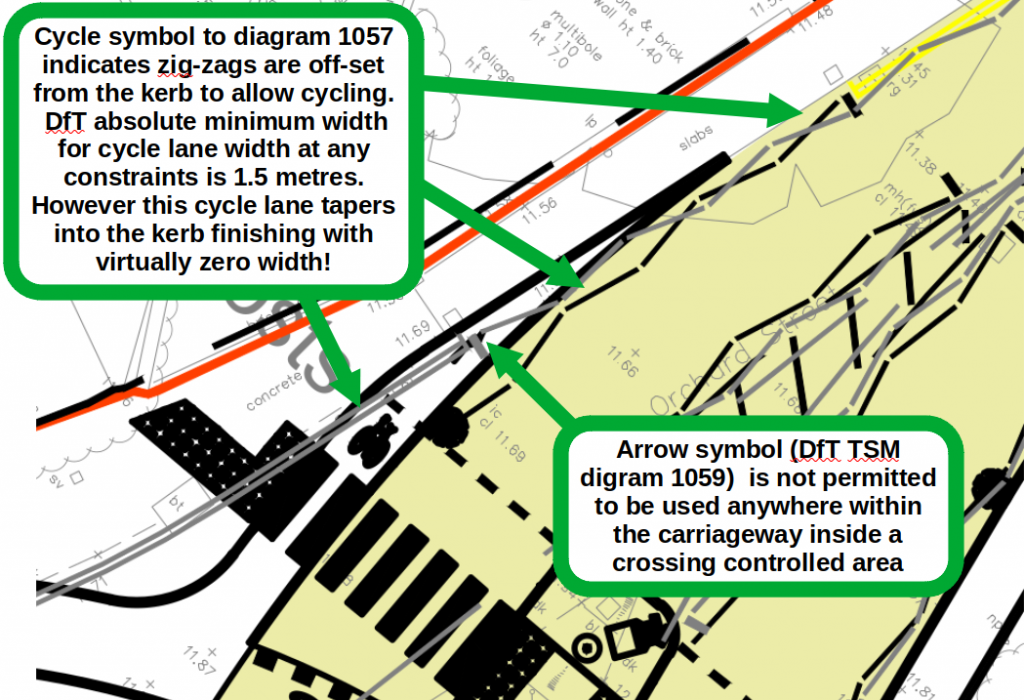 A feature of cycle priority roundabouts used in the Netherlands, is they always connect up the cycle lanes (or segregated cycle tracks) carried continuously on both sides of the roads joining the roundabout. Unfortunately this proposed roundabout design does not connect to any roads that carry cycle lanes (or segregated cycle tracks) that run on both sides for more than a couple of metres. Because it stands alone mostly without joining up to other identifiable cycle infrastructure, this design is dissimilar to genuine Dutch cycle priority roundabouts.

Orchard Street is sadly too narrow to accommodate segregated cycle tracks or bike lanes and is also a busy A road carrying approximately 14,000 vehicles a day. It is not clear what advantage is provided by having cycle lanes running away from this roundabout onto Orchard Street, only to have them taper off into the kerb a few meters away to the North? LTN1/20 does not recommend running discontinuous/intermittent short sections of advisory cycle lanes along busy A roads!

The proposals show an advisory cycle lane on the Avenue de Chartres. This road carries the A286 that regularly sees weekday traffic in excess of 14,000 vehicles per day! 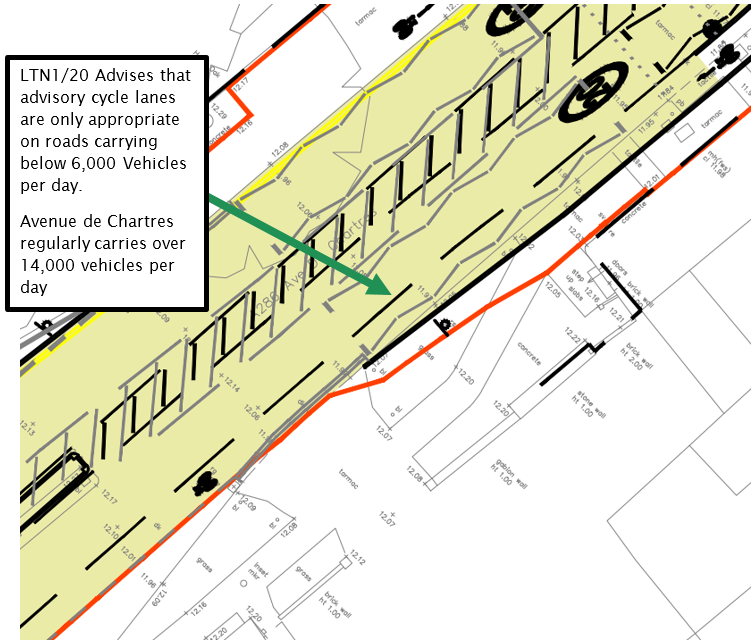 Weekday traffic on Westgate regularly exceeds 5000 vehicles per day. This is considered by the Department of Transport as “[Cycle] Provision suitable for few people and will exclude most potential users and/or have safety concerns”.

ChiCycle believe the only viable way Westgate can provide inclusive opportunities for walking and cycling is for motor traffic to be filtered to reduce traffic volumes on this street.

Unfortunately, the narrows at the Eastern end of Westgate are not wide enough to accommodate cycle tracks/lanes in addition to the pavements, parking and two way motor traffic. Again, it is also not clear in this location, what advantage is provided by having cycle lanes running away from this roundabout onto Westgate, only to have them evaporate a few meters away to the West? 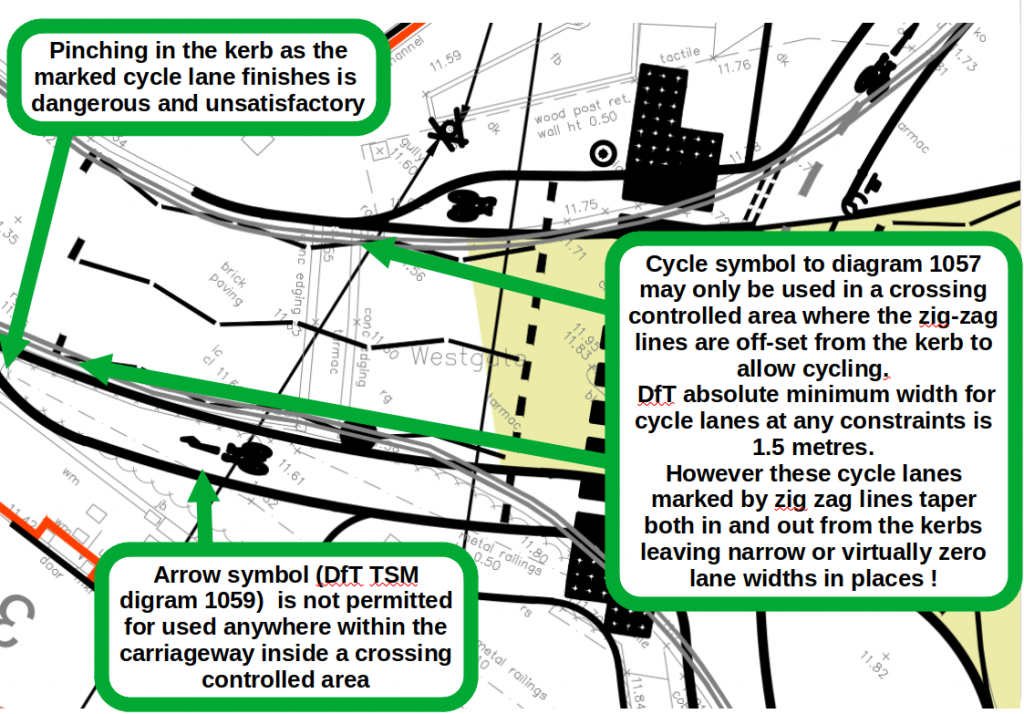 At Wall Cottage Drive, cycle lane widths marked by zig zag lines also confusingly taper down to zero width. One of the zig zag lines departs entirely from the main road axis into a side street which is not permitted. Thomas’ advice to reduce the use of road markings in this location is particularly welcomed by ChiCycle. 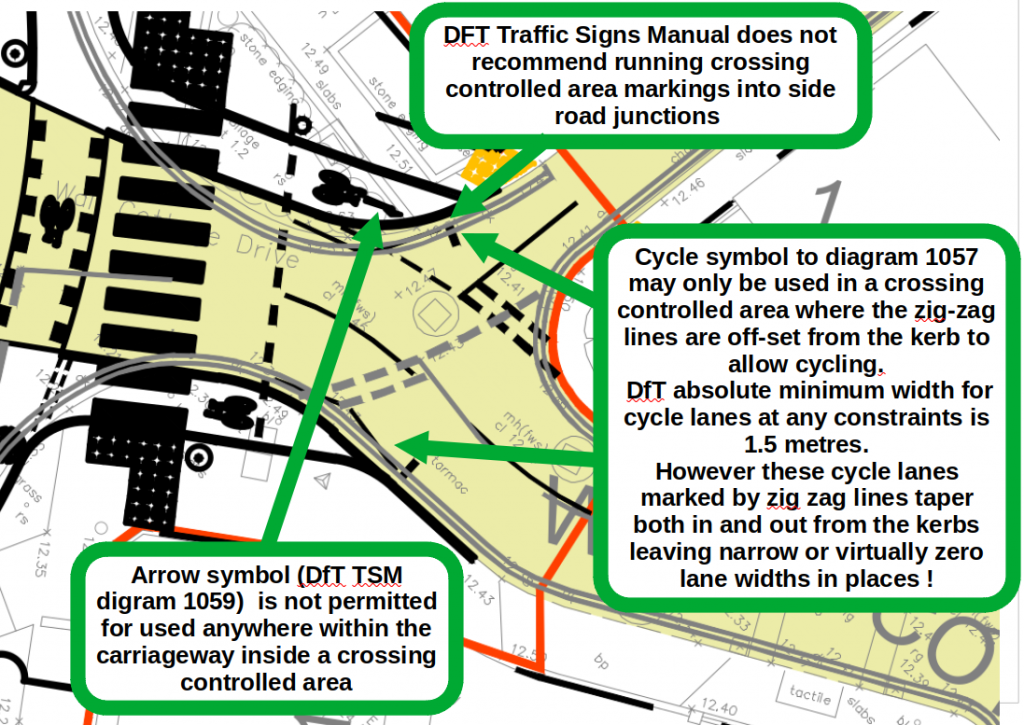 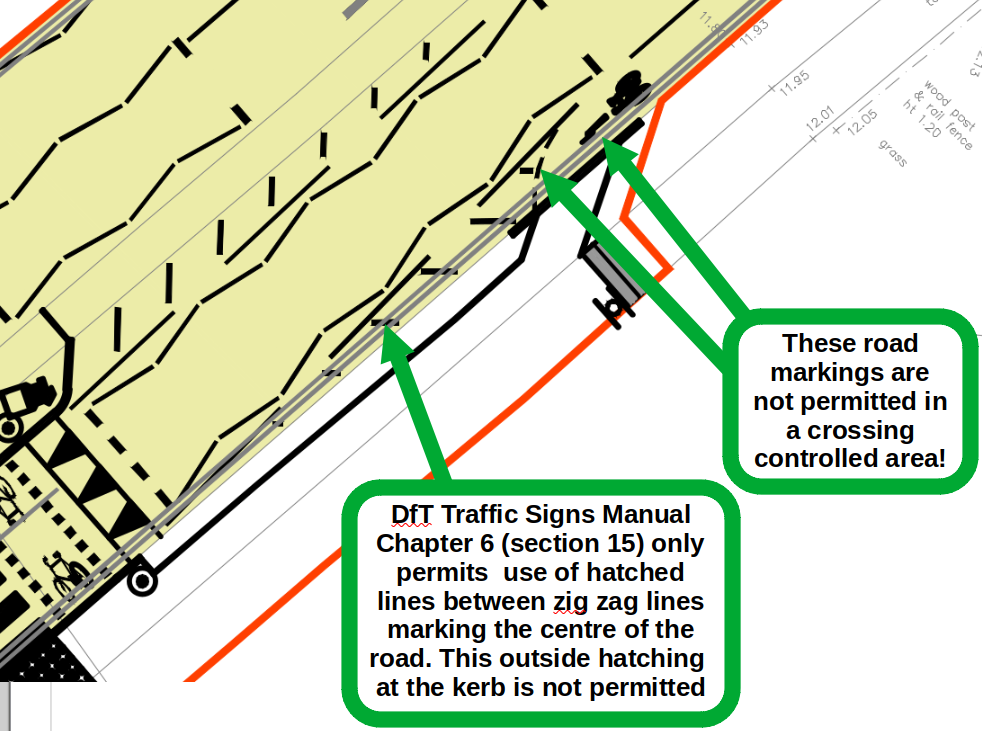 A Dutch Style roundabout has been constructed in Cambridge. This roundabout does not force cyclists to give way to traffic when leaving the arms of the roundabout that do not have cycle lanes or tracks. Could the Chichester plans be modified to follow this example in the UK? 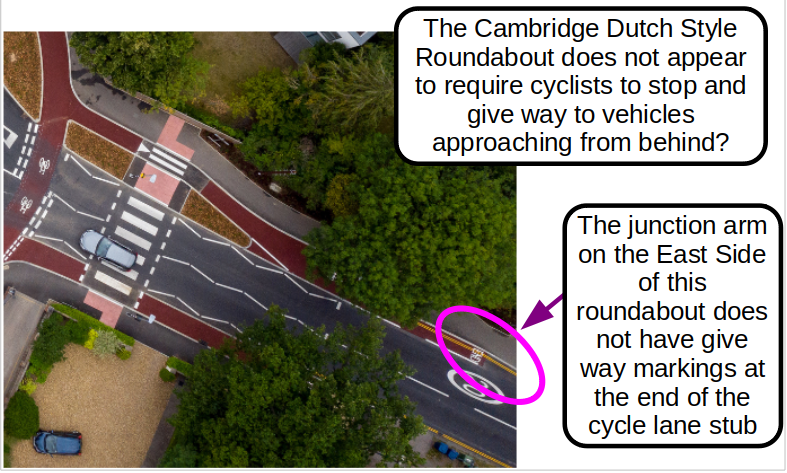 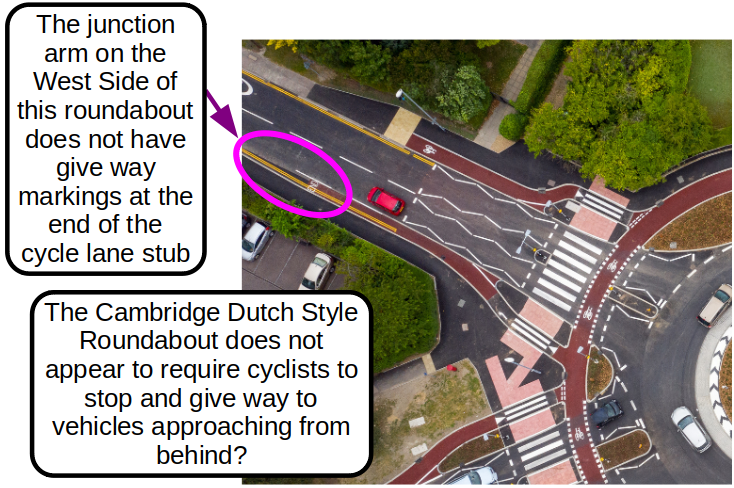 The two other arms of the Cambridge roundabout join to roads with continuous cycle lanes on each side. In this way it is much closer in design style to Dutch cycle priority roundabouts.