Here are some photos from two places with traffic management systems I have visited in recent months.

The first two photos show Farnham, a town I know well, having lived there in the early 1980s and I place I visit regularly. Well worth a visit if you don’t know it. 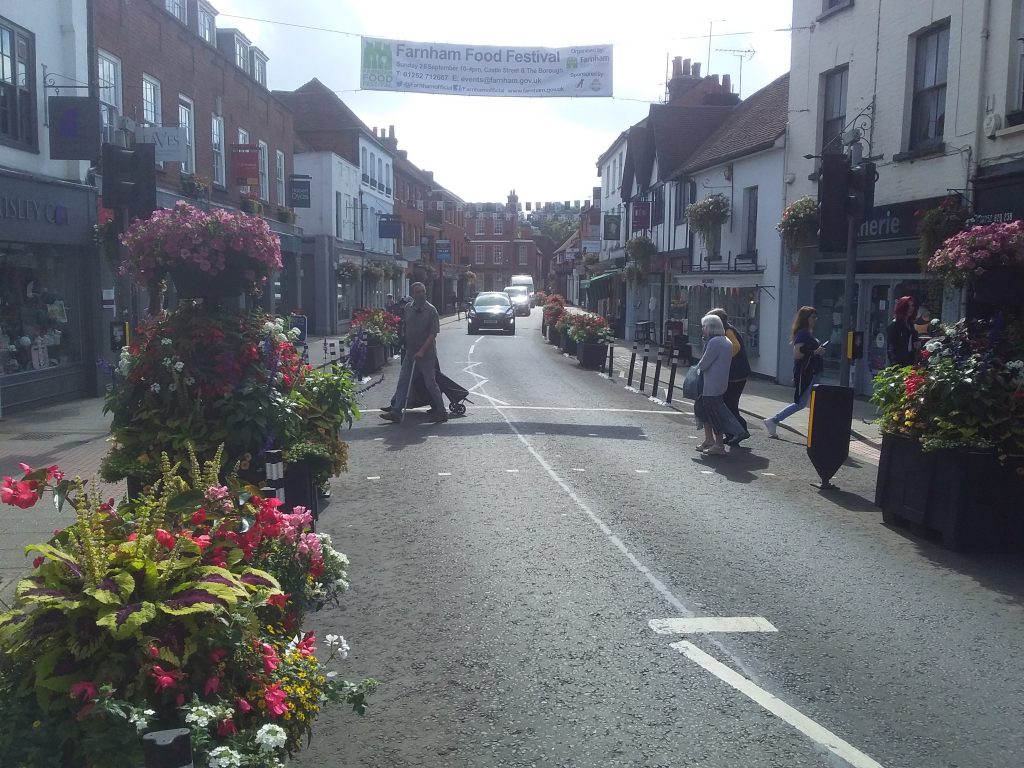 These plant holders were placed in Downing Street Farnham in September 2020, and I was pleased to see on a visit in November this year that they were still in place. I believe they replaced bollards which were placed there in the Summer of 2020 as part of a Covid related scene, similar to the scheme that was aborted in Chichester. Knowing Farnham as I do, I would expect they were the subject of much controversy. 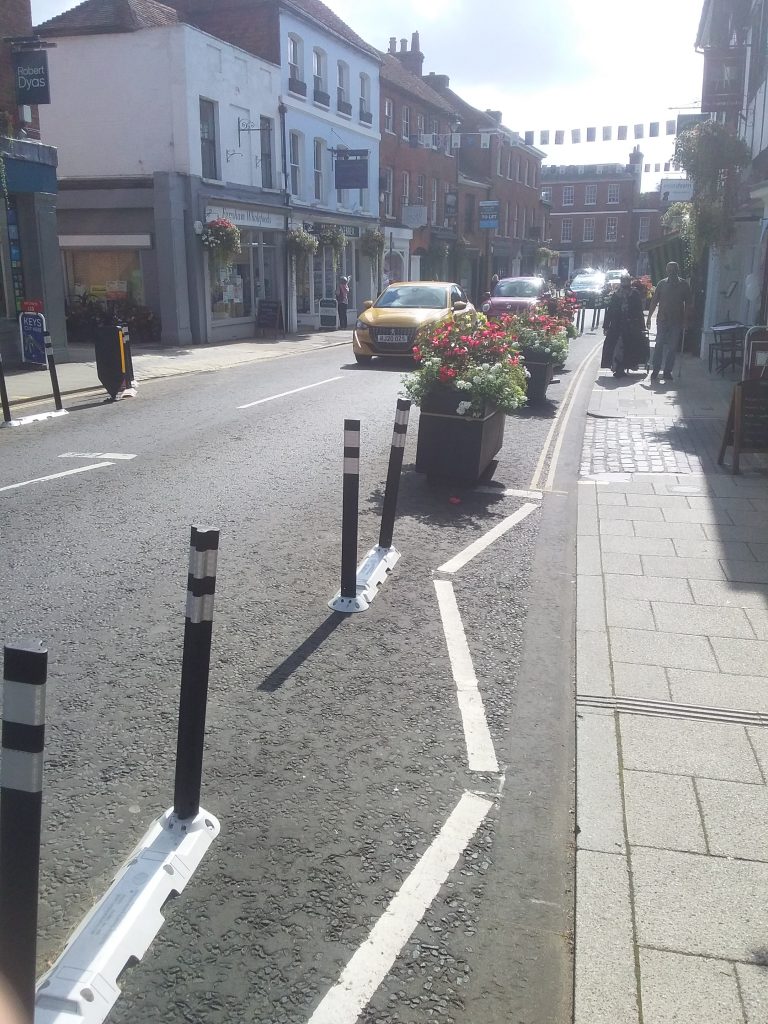 If you also know Farnham, you will be aware that in busy times this road would be a scene of two lanes of traffic, moving slowly and causing noise and pollution. I can’t remember what time of day I took this, but suffice it to say, usually there would still be much traffic on this road – but the cars are now further away from pedestrians and the shops. To give some context, Downing St is one of the main streets in Farnham and forms part of gyratory system of roads, with the centre of the town to the east (i.e. the left) of these photos. At the top of the road, perhaps 80 metres away, the traffic can either turn left and move westward away from the town centre, or right, where it would merge with other traffic. Walking down this road is now more pleasant and although I’ve not done it, cycling would be a lot safer, too. The planters also make it look more attractive. 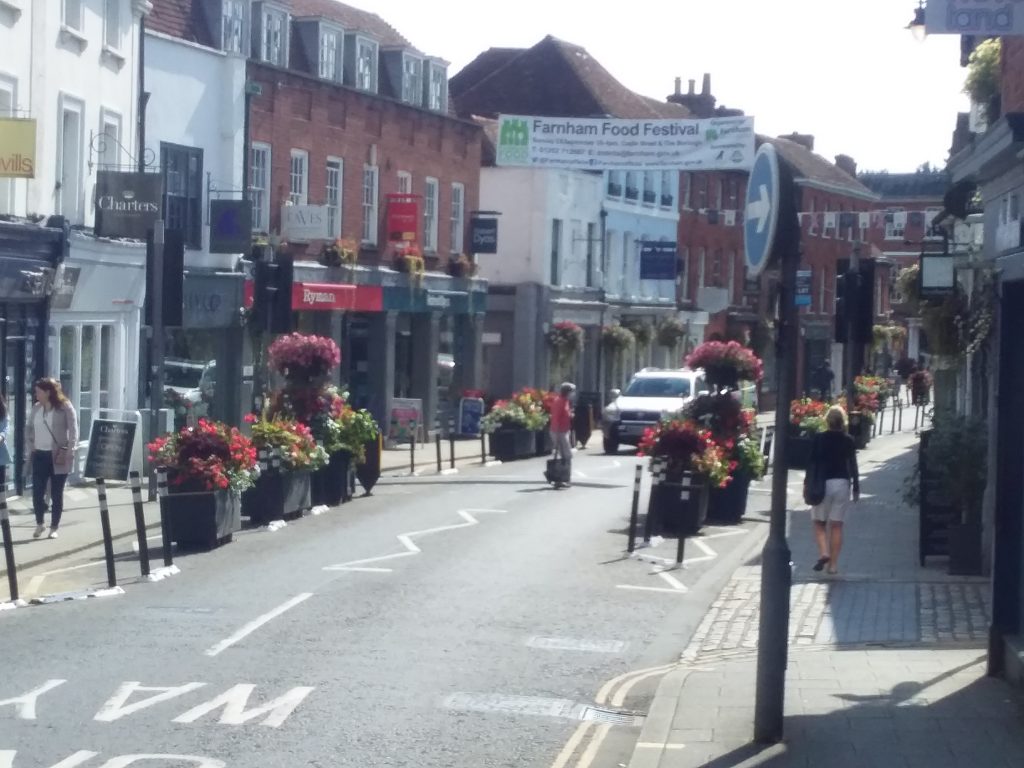 The second town I’ve looked at is Weymouth, as seen in the following image, which I visited for a few days in October this year, and a lovely place it is, too. 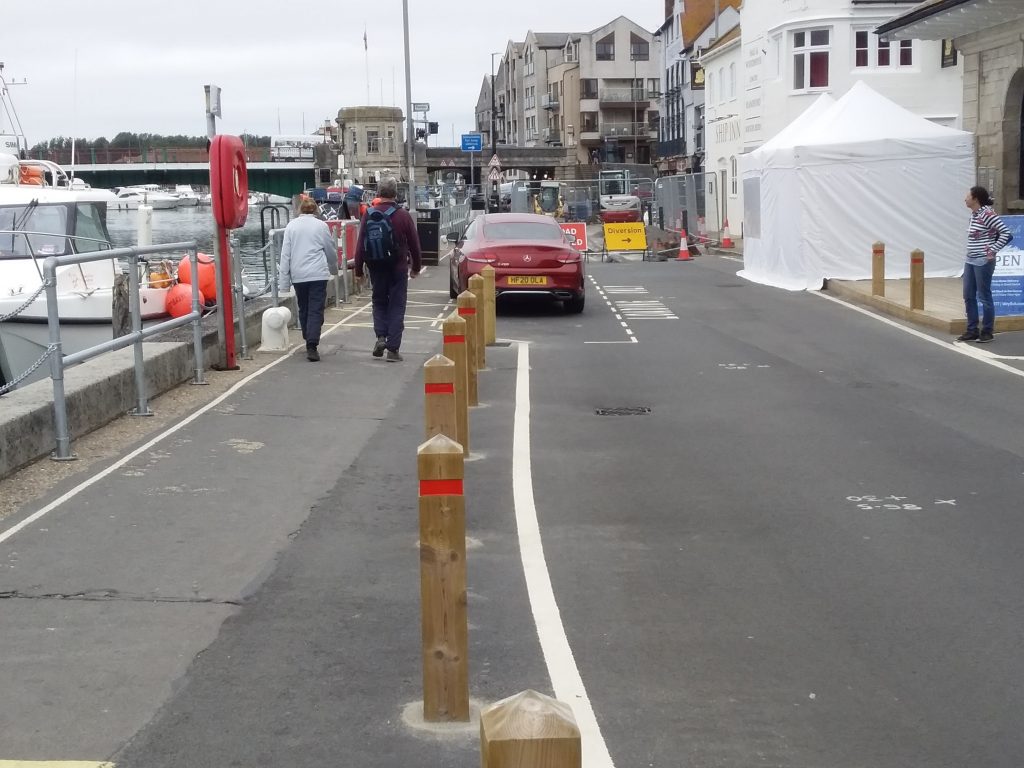 I hardly know Weymouth at all, but I was interested to see the roadworks going on as you can see in the first picture. This work is on Custom House Quay to the south and west of the main town and near the Nothe; ahead in the first photo you can see Town Bridge. The scheme seems to have similarities with Farnham, in that it comprises narrowing the road from two lanes to one and the widening of the pavement. The second picture, again looking towards Town Bridge, shows more of this attractive road , which runs along the side of the quay, and is full of cafes. 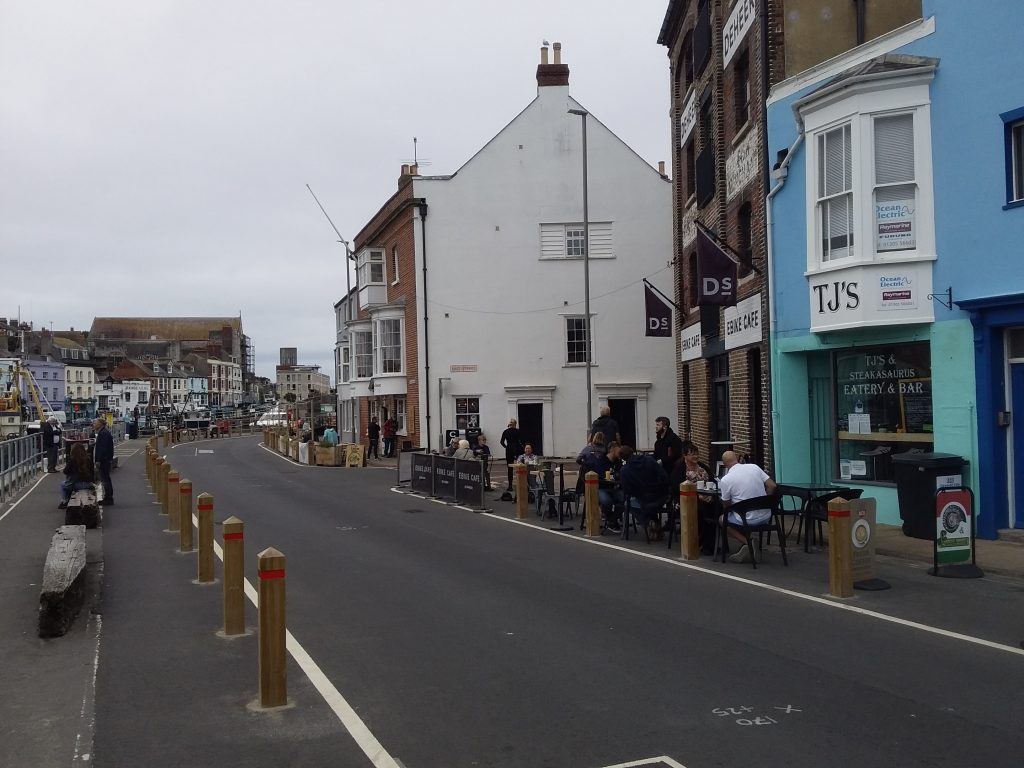 On visiting one of these, which also hired out and sold e-bikes, I talked to the owner, who had only recently opened it; she had found business to be very good so far. The widening of the pavements has allowed the cafes access to more room outside and unobtrusive wooden bollards keep the traffic away from pedestrians. The final photo is taken from a similar position but looking away from Town Bridge and towards the open sea. 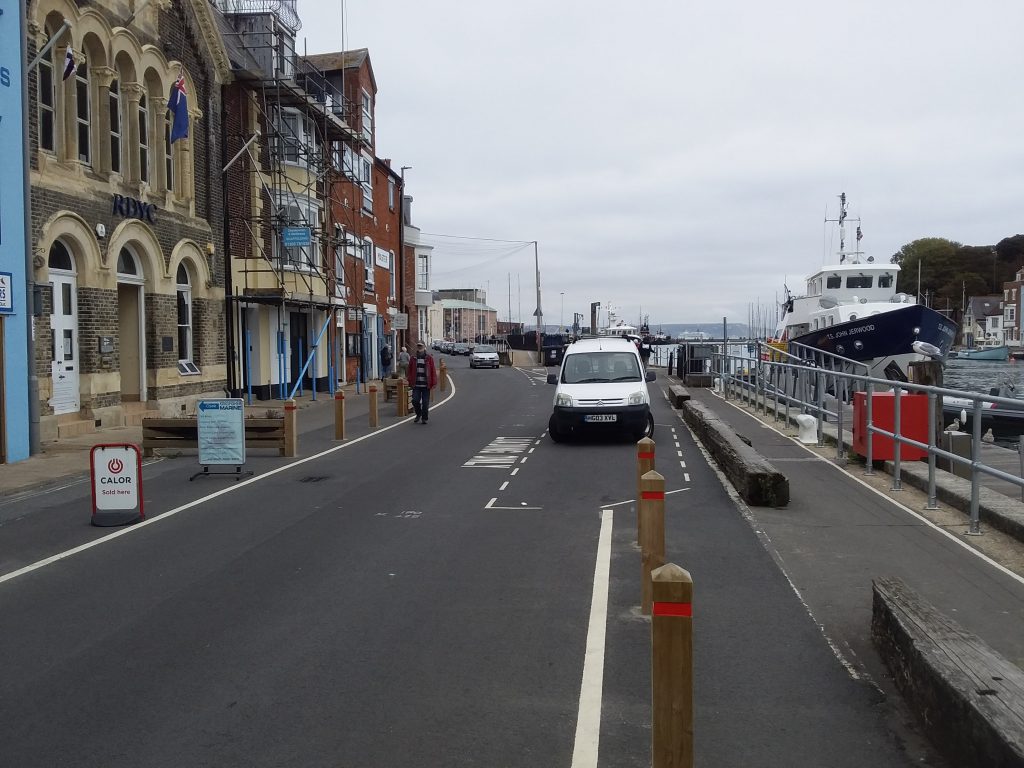 I don’t know how popular these changes to the roads were, but again I would assume they were controversial. It was not high season when I visited and therefore traffic was relatively light – it would be interesting to see how this all works in July and August. Also of course, it is still in construction.
There have been so many controversial schemes throughout the country, I wonder how many will survive long enough for people to adapt to them and hopefully allow them to become successful and permanent. I’m sure we in Chichester can learn from these developments.

Next time you find yourself around heavy, slow-moving traffic, a traffic jam, (in other words where the road would be considered “full”) look at the line of cars and see how much space is being taken up by, say, the first four cars; how many people in total are in those cars? Now look to see how many people are on the adjacent pavement taking up a similar space. Is the pavement “full”? I would suggest if there are only 4 or 5 pedestrians in that space, the pavement would not be considered full. And there’s the difference; as is often quoted, “If you were in a car and caught in traffic, you were the traffic.”  The only way we can solve our traffic problems is to encourage people to walk and cycle where possible. One way of doing this is pavement widening and cycle lanes. But they have to be properly planned, consulting experts in these areas before thousands of pounds are spent on schemes that annoy motorists, and cyclists and pedestrians find difficult to use.

Apologies from Mark Record for any messing up of the original formatting of Martin’s Post while uploading to the website.  Original word format draft version is also available here.