During the statutory consultation, which also involved a number of changes to the highway in other locations away from Westgate,  only five supportive comments were submitted and 30 objections were received which have been summarised in Appendix C to the report (this document also includes Comments from Director of Highways & Transport). All the objections raised related to concerns over the inappropriate conversion of sections of Westgate pavements into shared use cycle tracks.

ChiCycle also sent an objection that is available here (this document also contains includes Comments from Director of Highways & Transport).

The report informing the decision is available here.

The plans relating to this decision and that include the shared use sections of pavement on Westgate are available here.

Many of the Director of Highways & Transport comments dismissing the concerns raised by residents, contain errors and ChiCycle believe these are likely to be misleading. These comments can be read in Appendix C

ChiCycle are concerned that councillors decisions may have been misled by questionable advice given by the Director of Highways & Transport. Comments made dismissing concerns raised by residents contain errors and fail to reflect a reasonable interpretation of the relevant standards and guidelines.

Below the horizontal line are headings, text and diagrams highlighting the most obvious errors.

Issue No1. Concerns over Inter-visibility issues at driveways and blind corners have been dismissed despite the schemes non compliance with the relevant standards for intervisibility

At one of the blind corners the path width is below both CD143 and LTN1/20 absolute minimum widths for cycle tracks and/or walking routes! It is difficult to understand how such a narrow width of shared use cycle track could successfully alleviate potential intervisibility issues that residents have raised. Yet this claim has been made to dismiss residents concerns over potential conflict at this blind corner.

Visibility splays shall be provided for routes at junctions and crossings used by pedestrians, cyclists (on shared use facilities only) and equestrians where these users have to stop or give way.

The current proposals entirly fail to meet the splay visibility criteria outlined in CD143. Indeed, it is ridiculous to claim the design even attempts to meet the required standard for compliance!

Any crossing of a highway or junction between cycle routes should be located such that all users have full visibility as shown in with Figure 5.4. The x distance is in Table 5-6 and y distances are as shown in Table 5-5 (SSD).

With the currently proposed geometry, it is impossible for the scheme to meet LTN1/20 splay visibility criteria. 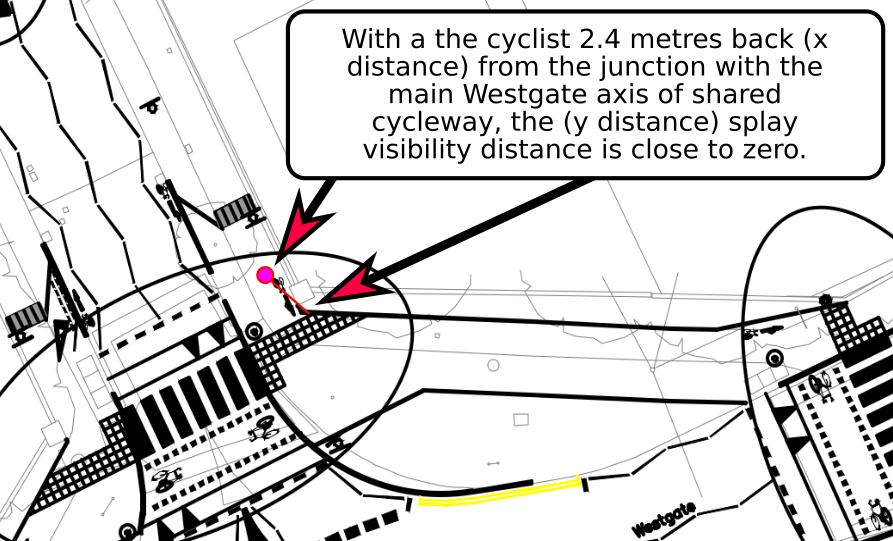 Justifiable concerns raised by residents over potential conflict at these blind corners, has been unjustifiably dismissed. The current proposals show no evidence of splay visibility having been considered at all.

Issue No2. It is incorrectly claimed that  CD143 clause E/3.5 permits the narrow widths for shared use pavements proposed for Westgate.

CD143 is a design standard for walking, cycling and horse-riding facilities on and/or adjacent to the motorway and all-purpose trunk road network! It is not intended as a standard for urban residential neighbourhood streets and therefore it is unreasonable to claim it is a suitable standard to use for designing shared use pavements on Westgate and Sherbourne Rd. Nonetheless, the current proposals fail short even the absolute minimum srequirments of CD143 which has relativity relaxed standards because volumes of pedestrian traffic adjacent to the motorway trunk roads tend to be much lower than on city residential streets.

CD143 Table E/1.2 shows the absolute minimum width of routes used for walking is 2 metres wide plus additional width wherever the path is bounded by a vertical feature. Table E1.2. is shown below.

CD143 clauses E/1.2.1 & E/3.5.1 both state walking and shared use routes should be separated from the carriageway by at least 0.5 metres where roads have speed limits of 40 mph or less.

Therefore a shared use pavement compliant with CD143 requires a 3 metre distance between the carriageway kerb and vertical feature bounding the opposite side of the path (if over 1.2m high).

Even if the CD143 requirement for a separation strip is ignored, this will still require pavement widths equal or greater than 2.5 metres width on Westgate where the pavements are bounded by tall walls on one side.

The pavements on Westgate proposed for conversion to shared use are significantly below CD143 absolute minimum widths. Locations where this is a issue are shown in the image below. 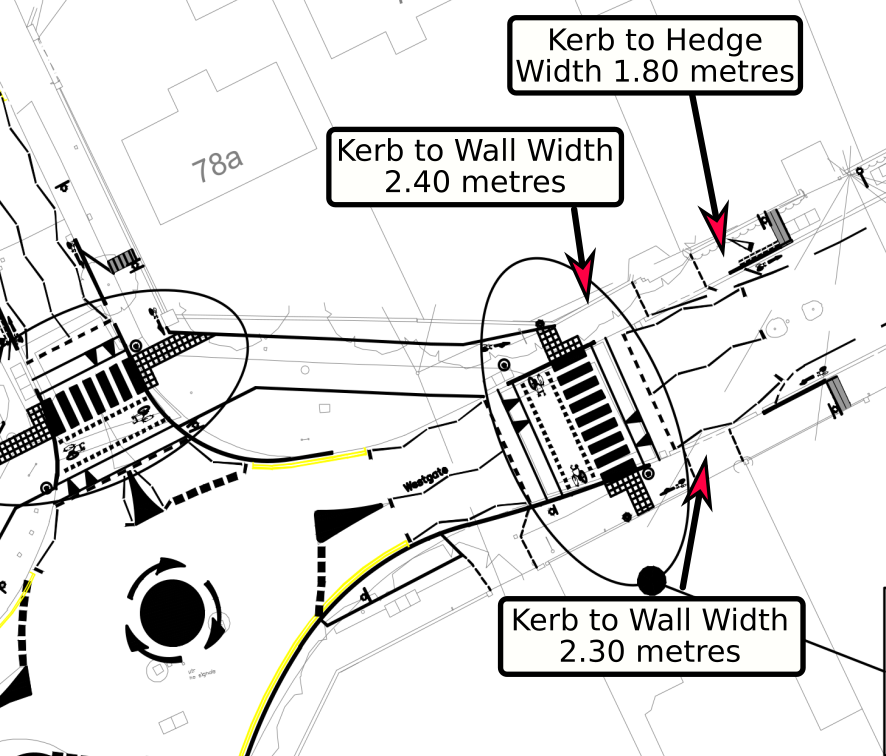 The width of the route will be severely restricted between the parallel crossing beacon posts and the vertical brick walls and pillars bounding the pavement at corners. Here the effective width of the route will only around half the absolute minimum required by CD143. This requires an actual width of 3 metres at these restrictions because additianal width is required where there are vertical features to comply with CD143. These issues are illustrated below. 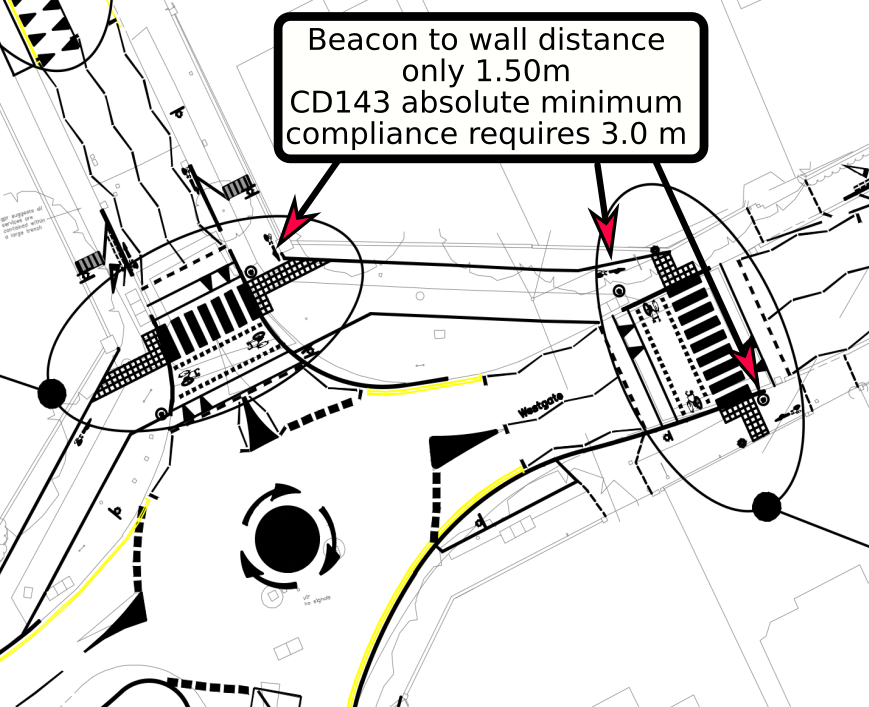 Issue No3. Where a cycle route is two‑way the minimum crossing width should be 3 m but it is incorrectly claimed 1.8 metre width cycle crossings will be adequate

Cycle movements that will use one of a crossings in both directions are illustrated in the image below. 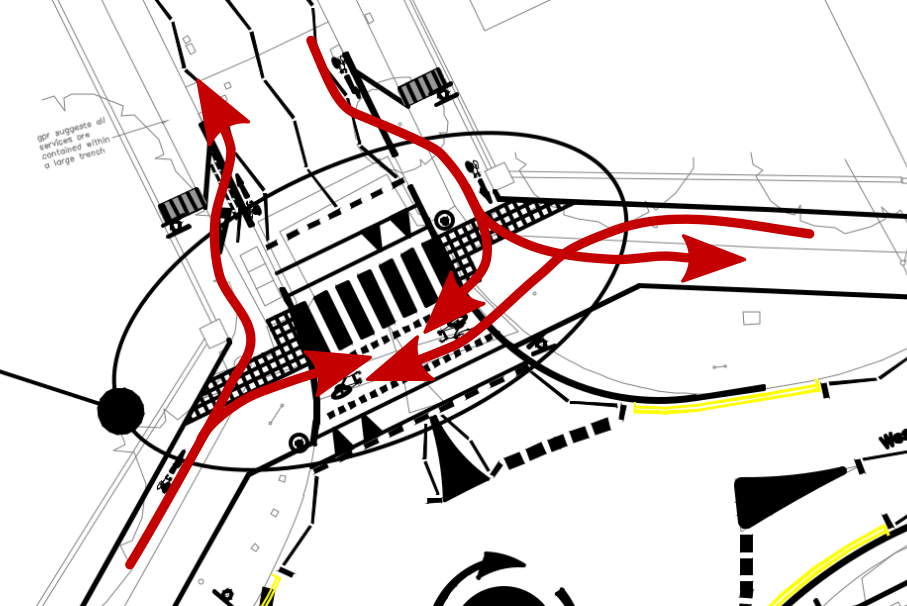 Either the design of the junction must be modified to restrict two way cycling on the pavements, or the cycle crossings must meet Traffic Signs Manual minimum widths for two way crossings.