James Thomas (a Bognor Sustrans campaigner) contacted ChiCycle asking our perspective on the maintenance of local cycleways. Very little maintenance of pavements or footpaths takes place in Chichester and this exacerbates issues with the extremely poor quality design of many cycleways in the city. It is not possible to entirely separate these compounding problems of poor design and lack of maintenance. I will describe below a typical route in Chichester that illustrates the difficulties encountered when riding a bike in the city.

On Friday the 18th Jun 2021 I wanted to by a few items from the Force Four yacht chandlers on Birdham Rd on the outskirts of Donnington. I work at Chichester college so this is only a short 2.8 mile round trip. This kind of journey is easy to make with a bike in most European cities. It should also be easy to ride this route in Chichester if only small investments in walking and cycling infrastructure were made.

Cycling southwards on Stockbridge Rd, the first cycle infrastructure I encountered on the Southbound going side of the road was an incredibly broken 20.3 metre section of former cycle lane that has now partially collapsed having subsided into a hole in the ground (apparently due to tunnelling underneath to install cable conduit). I made no attempt to ride on the remnants of this cycle lane as I would likely have damaged my bike, fallen off and hurt myself. The following images detail it’s extremely poor state of repair.

After this short southbound cycle lane ends, there are additional worn out red tarmac patches, sign posted as a cycle routes. In one direction, the route directs cyclists northwards onto a now impassible overgrown cycle-lane on the northbound Stockbridge road. The images below show the poor design and absence of maintenance.

Another cycle route is indicated going towards the footbridge but this is not suitable for cycling and is labelled as no cycling! The following photo shows the issue.

Department for Transport guidelines for walking and cycling indicate that at traffic flows of above 5,000 vehicles per day, very few people will be comfortable cycling with motor vehicle traffic. In October 2019 average traffic flow on the Chichester City section of Stockbridge Rd we around 11,000 vehicles per day! During the same period the A27 carried approximately 25,000 vehicles per day! It does not seem reasonable to signpost a recommended cycle route that involves sharing the carriageway with these high volumes of motor vehicles. The image below illustrates the unappealing nature of the Stockbridge roundabout as part of a cycle route.

After crossing the A27 heading towards Birdham, there is no sign of a cycleway until reaching the pedestrian traffic lights/crossing by the local shops. On the southbound side of the road there are two end of cycle-way signs back to back about 12 meters apart! I fail to understand what this road paint on the pavement is intended to communicate. After passing the Stockbridge shops I encountered no other cycle provision on my way to the yacht chandlers.

On my return journey I notices there is a short (approximately 110 metres) length of pavement at the Stockbridge shops labelled as a cycle track. It is not a viable route for utility of commuter cyclists as it runs over multiple blind driveways as illustrated in the image below.

It is unclear why an this orphaned stretch of cycle-track has been created in this location. This cycle-track ends 170 meters before reaching the A27 Stockbridge Roundabout the location show below. 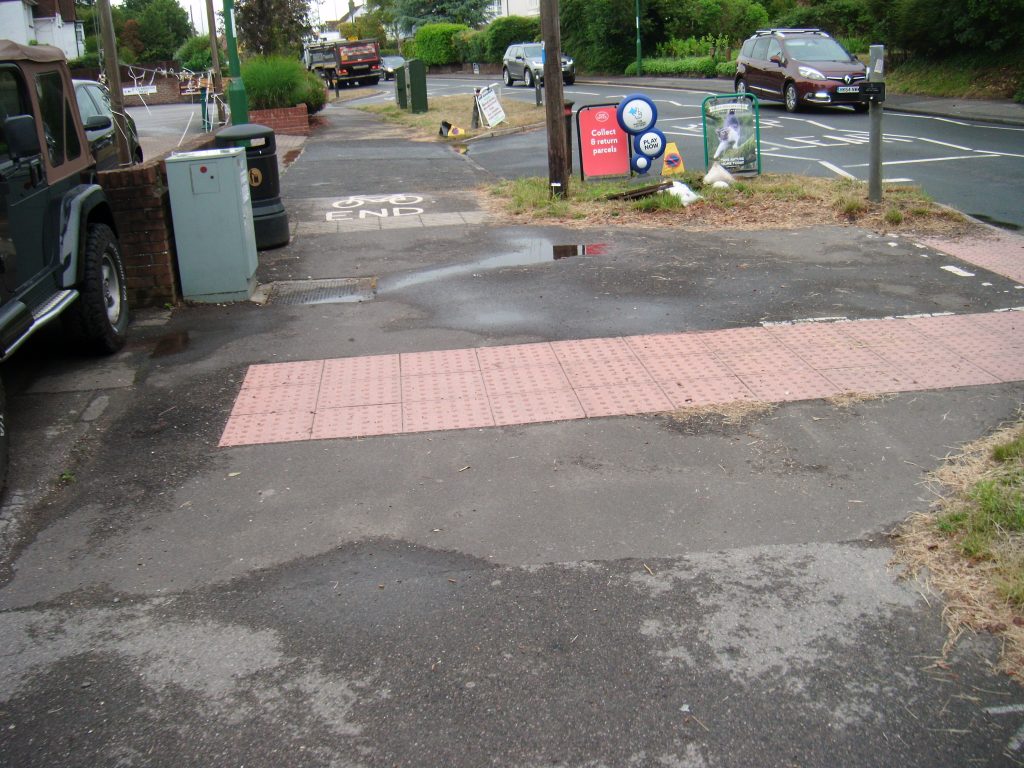 Some of the issues encountered on the Northbound journey can be seen in the following video.

Once the A27 roundabout has been crossed the inadequately narrow cycle-lane is the bizarrely directed onto the pavement immediately before a side junction so cycles loose priority over vehicles turning left. This forces cyclists following the marked route to have to needlessly stop at the side road and look behind themselves for vehicles turning left that they must give way to. This is tremendously inconvenient as being made to frequently stop dissipates all momentum gathered by a cyclists pedalling effort. The image below illustrates the issue with this unsatisfactory element of the cycle infrastructure.

Immediately after crossing this side road the branches of the trees have been allowed to grow so low that it not possible to ride a bike along the following section of shared cycle track. It is  unhelpful that this part of the route lacks proper drainage so pedestrians can only use the pavement if they have wellington boots. These problems are shown in the images below. 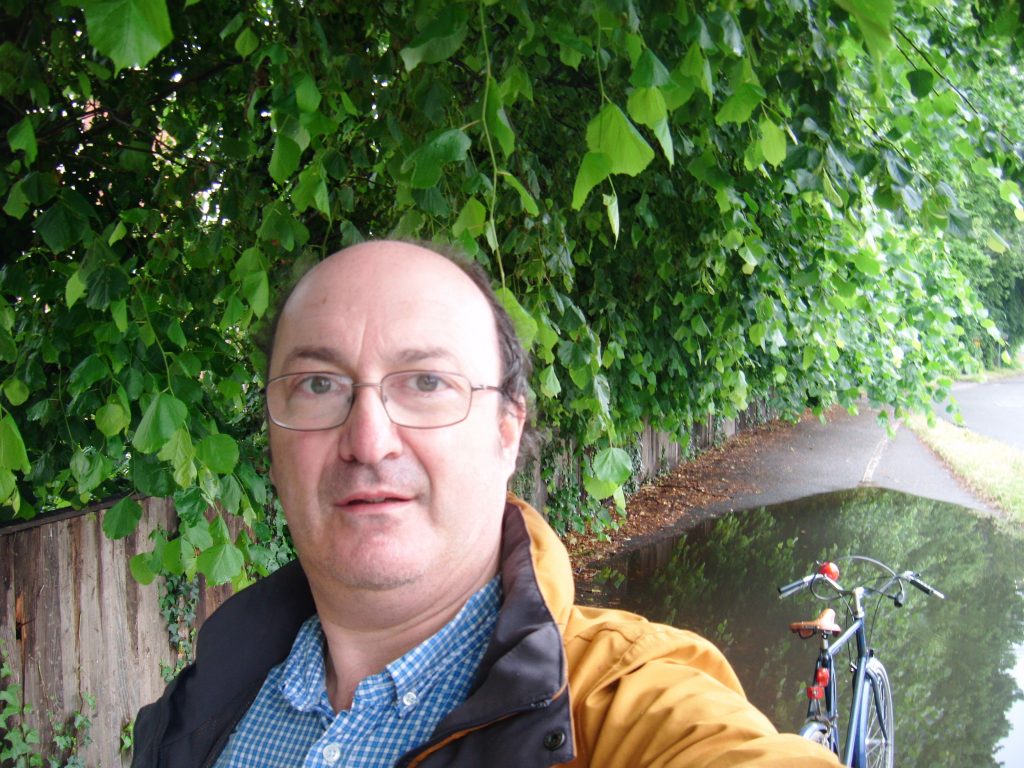 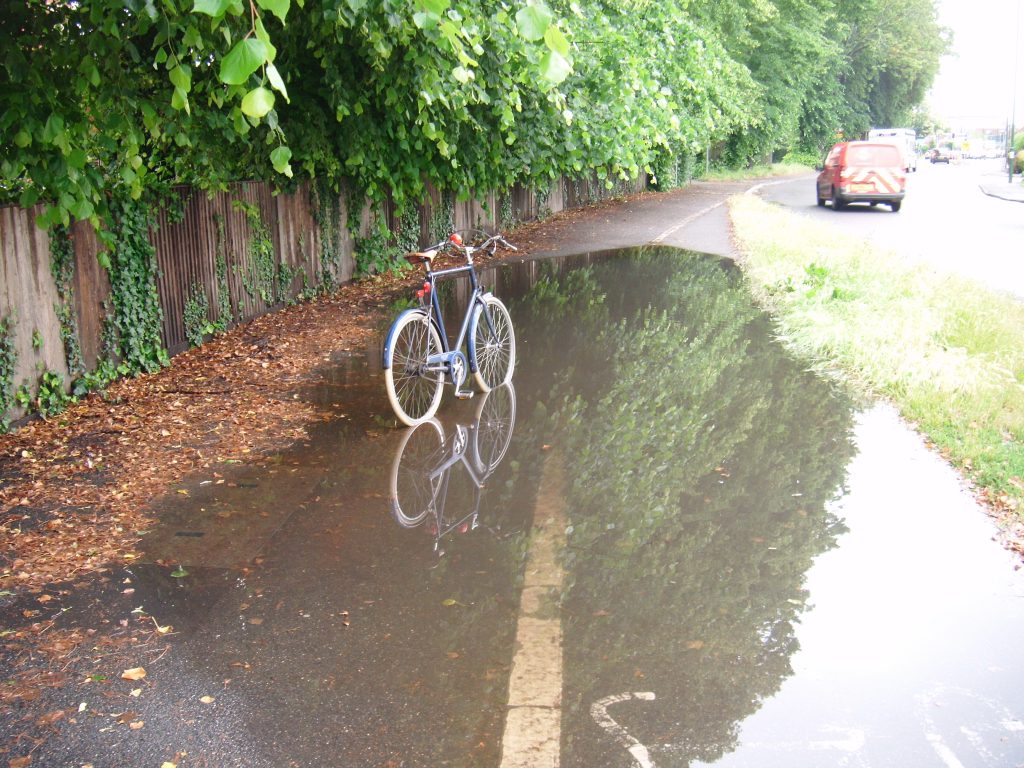 20 metres further north towards the city centre, the section of pavement provided for cycling is too narrow even for single way cycling with vegetation obstructing the path. The road paint indicates the path is intended for two way cycle traffic and pedestrians! The specification is well below DfT minimum specifications for shared use cycle tracks. Cyclists have to go around a blind corner created by the path zig zagging between trees. This issue is illustrated in the following two images. 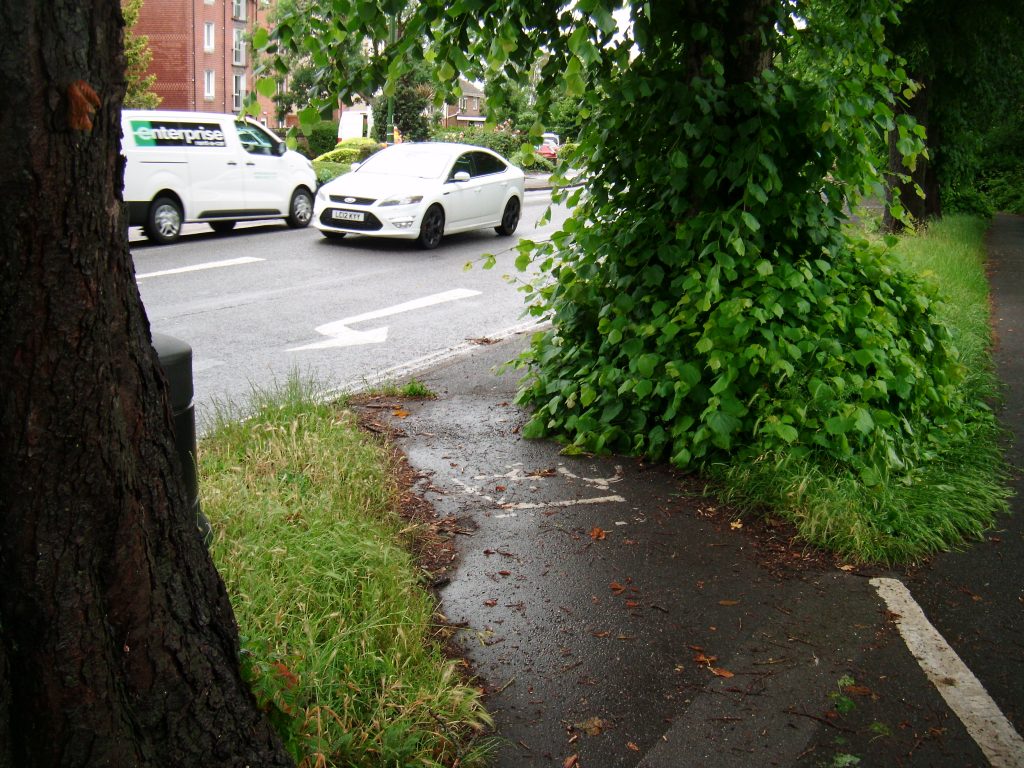 At the junction of Terminus Rd, poorly maintained street drainage leaves pedestrians unable to commute to work without bringing wellington boots. Having cyclists riding bikes over this pedestrian crossing and sharing these busy city pavements is unsatisfactory for both pedestrians and cyclists (particularly vulnerable/elderly pedestrians). This arrangement does not follow DfT guidelines on urban street design. These issues are illustrated in the following image.

There is a section of tarmac with a few traces of green paint at the approach to the station on the northbound side of the road. However the remaining road paint is so worn that few drivers appear to identify it as a bike lane. The image below shows the road-paint is so worn out the original signage can now only be made out by a slight change in the tarmac’s surface texture.

On this route between Chichester Station to Birdham and return, there was no cycle infrastructure capable of supporting practical commuter or utility cycling. The only viable (but unsatisfactory) option is for commuters and utility cyclists to share the road space with the intimidatingly heavy flows of motor-vehicle traffic.

The majority of cycle infrastructure in place on the route is in a shockingly poor state of maintenance.

The extremely low design standards of this infrastructure ensure few existing cyclists would opt to use the provision, even if it was maintained. The poor quality of the design is highly unlikely to persuade any people to make a modal shift towards walking and cycling.

If WSCC and CDC are genuine about their commitment to preventing climate catastrophe and increasing the proportion of people walking and cycling, then they must urgently rethink, invest in, redesign and rebuild this transport infrastructure.