In the image below, residents illustrate what it will be like to have bikes rounding this blind North East quadrant of pavement at the Westgate/Sherbourne-Rd mini-roundabout. 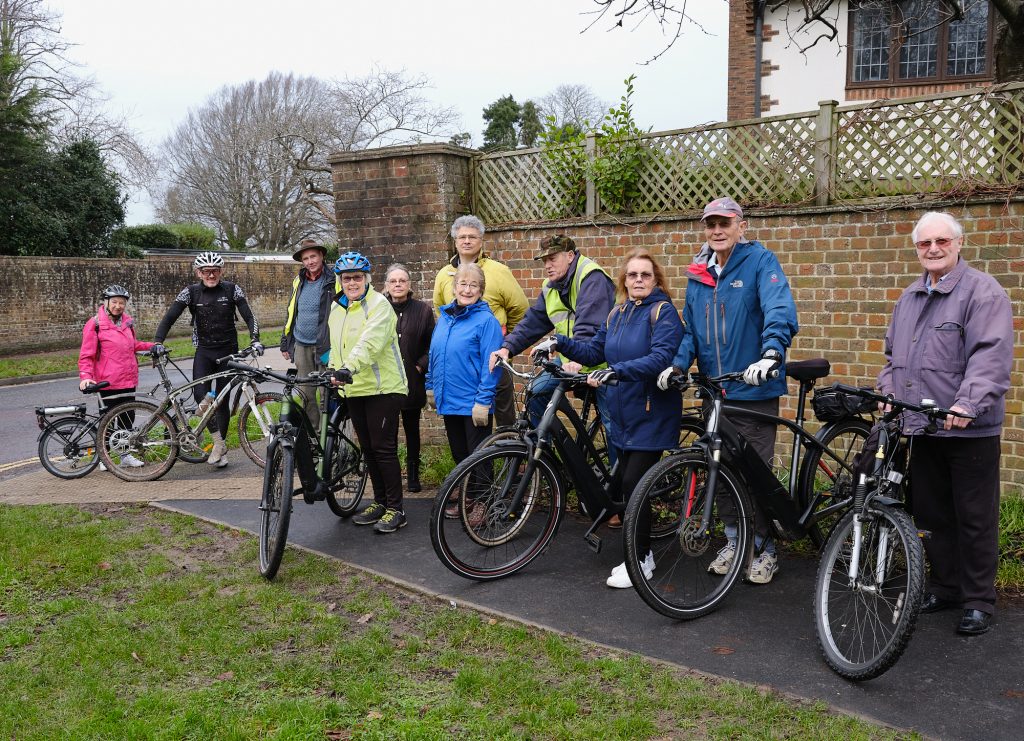 In the image below, residents line up on the blind corner at the South Eastern quadrant of pavement going past a busy osteopathy clinic who’s driveways will be blind to approaching cyclists. 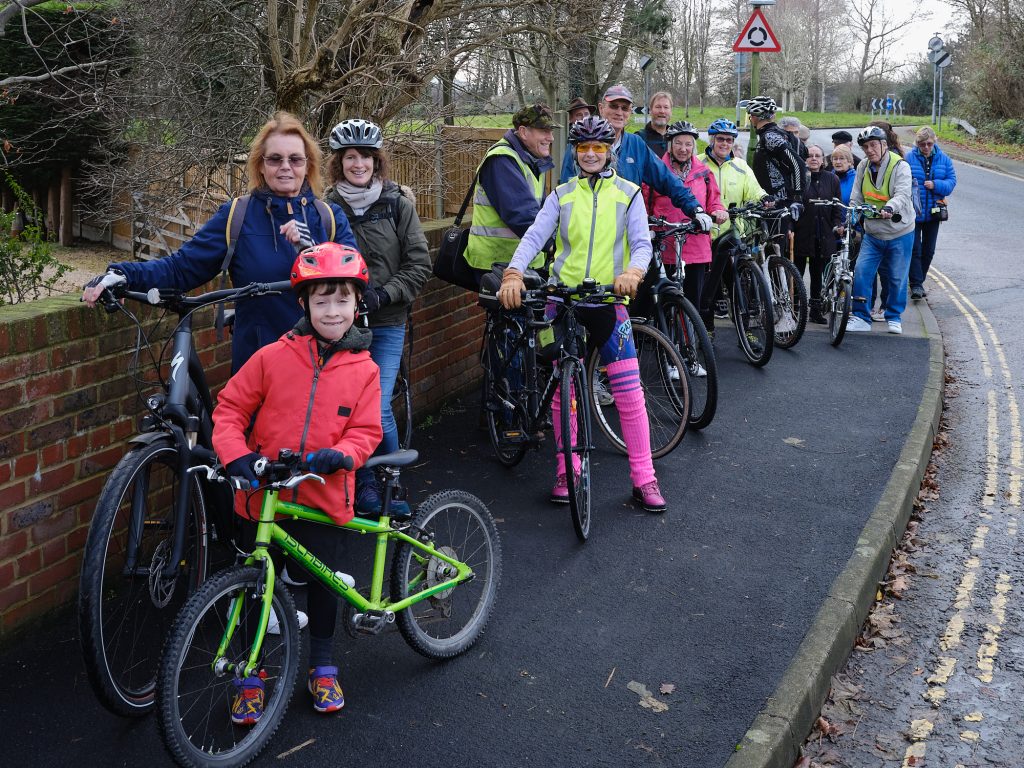 Why is the Community Concerned?

Outline agreement 14/04301/OUT for Phase One of the West of Chichester development was granted permission on 11th Apr 2018. This agreement required highway works to be completed in several locations around the city to mitigate for increased traffic flows from new housing. The approved drawings for alterations to the mini-roundabout at Westgate/Sherborne Rd. showed cyclists would remain safely separated from pedestrians at this junction. The proposed segregated walking and cycling provision appeared reasonable, so there was little reason for individuals or community groups to oppose the scheme at this stage.

WSCC later published Traffic Regulation Order (TRO) CHS9038RC which remained open for consultation between the 8th July 2021 and the 5th Aug 2021.  This order contained a starkly different arrangement for the Westgate and Sherborne Rd mini-roundabout. It was unlike the original approved drawings from the outline agreement.

The WSCC Traffic Regulation Order showed cyclists will be directed from of the roadway and onto the narrow pavements to share space with pedestrians. Cyclists are to leave the roadway immediately before reaching the mini-roundabout.

Residents greatest concerns are over cyclists who will be making turns at this junction. Cyclists who are turning will be expected to ride onto the pavement then suddenly turn blind sharp corners. These corners are be tightly bound on the inside by tall and substantial brick pillars. There will be zero forwards viability at these corners.  Cyclists and pedestrians will have virtually no opportunity to see each other before collisions occur.

Westgate carries the National South Coast Cycle Route and is the only viable cycle link between the city centre and anywhere to the west of the city. The urban narrow pavements of Westgate and Sherbourne Rd pavements are completely unsuitable for carrying this cycle traffic.

A more thorough analysis of how the Westgate/Sherbourne-Rd shared pavement scheme fails to meet national guidelines and standards is available on this link.

WSCC are failing in their Statutory Duties under the 2010 Equality Act!

Chichester District Access Group (CDAG) are an independent group of voluntary advisors on disability issues and Glynis Spencer is one of the CDAG officers. ChiCycle contacted her over concerns that the shared use pavement proposal scheme would cause difficulties for people with mobility issues.

Glynis phoned WSCC and spoke directly to Steven Shaw, Highways Team Manager. This was on the last day of consultation for the TRO (5th Aug 2021). She expressed concern that people with disabilities would be discriminated against by conversion of the pavements into shared use cycle tracks. Steven told Glynis that planning permission had already been granted in the 14/04301/OUT outline agreement and there was now nothing she could now do to change the outcome. No record of this phone call was documented in the appendices that guided councillors in making recent decision HT12 21/22. The decision was taken on 29th Nov 2021 (the Chichester Observer published an article about the decision here) giving approval to Traffic Regulation Order (TRO) CHS9038RC

Department for Transport (DfT) guidelines for Cycle infrastructure design LTN1/20 expects local authorities to actively engage with disability groups, at an early stage before considering converting pavements for shared use. It states:

6.5.5 … Engaging with such groups is an important step towards the scheme meeting the authority’s Public Sector Equality Duty.

ChiCycle made a freedom of information (FOI) request to WSCC to discover which disability groups had been contacted about the conversion of the pavements. We asked:

Please list which parties representing disabled and/or vulnerable people have been actively consulted/engaged by WSCC over the (TRO) CHS9038RC proposals to route cyclists onto the Westgate/Sherborne Rd pavements?

We received the following reply in  FOI/3119 (available in full here):

Specifically in relation to consultation on the Traffic Regulation Order the West Sussex Association for Disabled People were consulted and are on all statutory consultations.  They are a large forum representing the interests of disabled people across the whole of West Sussex.

Glynis Spencer was an acting  trustee for West Sussex Association for Disabled People (WSAD). Glynis wound up WSAD both as a charity and as a business in 2013!

On hearing the only party contacted by WSCC representing disabled and/or vulnerable people was WSAD, Glynis remarked:

I am more than a little intrigued by the claim that WSCC has consulted West Sussex Association for Disable People (WSAD), as I was a Trustee for WSAD and the Company and Charity were wound up in 2013.

It appears WSCC have failed to actively engage with any Disability Group at any stage of planning for this scheme. It seems WSCC are not fulfilling their statutory duties under their Statutory Duties under the 2010 Equality Act!

We have at least two residents in Parklands who regularly use the Westgate/Sherborne-Rd junction who rely on assistance partner dogs.

One of these residents made the following objection to the scheme (available in appendices C comment No 13) :

As a disabled electric scooter user & having a Canine Partner dog who helps me to remain independent, we regularly use
Sherborne Road & Westgate to access the GP Surgery the Vet, & the City Centre & Train Station. The paths in Chichester are
poor in general, being hazardous to negotiate, & Westgate in particular is narrow. The plan to make this dual purpose for
use by pedestrians & cyclists is crazy, & dangerous for all concerned. This would cause major problems for not only
myself & my dog, but also several blind residents& their Guide Dogs, and anyone with young children(prams/buggies)&
elderly pedestrians in particular. This cannot be allowed to happen .

WSCC stated that during the statutory consultation five supportive comments and 30 objections were received which have been summarised in HT12 21/22 Appendix C.

However, despite residents praising some aspects of the scheme, such as addition of pedestrian crossings, there was unanimous opposition to the conversion of Westgate/Sherborne-Rd pavements to shared use.