ChiCycle will be contacting Chris Heaton-Harris (the minister for cycling and walking) and Baroness Vere of Norbiton (the Parliamentary Under Secretary of State at the Department for Transport) to get national governments official response to the following concerns.

The A27DesignatedFunds@highwaysengland.co.uk Chichester to Emsworth Route for Non-Motorised Users is a scheme 8.85 km in length that will remove cycle lanes from the A259 carriageway with the intention of relocating cyclists onto urban pavements/footways. Approximately 4 km in of urban pavement will be converted into shared use cycle tracks.

It is proposed that two way cycle traffic will be carried on single pavements on  only one side of the road. These pavements are intersected by over 150 side roads and driveways. The proposal will give cyclists priority over traffic at many of these intersections but the cycle track is designed with “no setback” at these crossings against recommendations in LTN1/20. The DfT guidelines clearly indicate (on page 108) that this design is unsuitable for two way cycle traffic.

Design priority, no setback
10.5.24 This approach is suitable for one way tracks
travelling in the same direction as the adjacent traffic
lane, as shown in figure 10.17. Drivers must give way to
cyclists when leaving the side road, but there is no
priority for cyclists over traffic turning in…

For cyclists to be granted priority where motor vehicle intersections cross the pavements, the position where motorists must give way will have to be moved back by approximately 3 meters from the existing carriageway kerb-line. Unfortunately this will leave many of the exists blind so that motorists will have virtually zero visibility along the main axis of the A259. When drivers commit to pull out onto this road they will therefore be unable to adequately see traffic approaching in either direction. This contravenes guidelines for junction geometry given in both the DfT Manual for Streets 2 and in LTN1/20. The following advice is given within LTN1/20.

LTN1/20 5.8 Visibility splay
5.8.2
Any crossing of a highway or junction
between cycle routes should be located such that all
users have full visibility as shown in with Figure 5.4.
The x distance is in Table 5-6 and y distances are as
shown in Table 5-5 (SSD)…

In the diagram of splay visibility shown above the absolute minimum distance for dimension X1 is 2.4 metres and the Y1 dimension for the recommended cycle design speed of 30 kph, is 31 metres. Dozens of the cycle-track crossings will fail to come anywhere close to meeting absolute minimum DfT road safety standards.

The justification for the Highways England proposal to convert pavements into shared use cycle tracks is that the existing provision for cycling is considered unsafe. However, DfT guidelines indicate this proposal will be counter productive and increase risks for people using all modes of transport on this route.

Appendix (page41) Summary principles for cycle infrastructure design
2. Cycles must be treated as vehicles and not as pedestrians.
On urban streets, cyclists must be physically separated
from pedestrians and should not share space with
pedestrians…

A significant concern with conversion of  pavements into shared use cycle-tracks is the threat of bikes colliding with pedestrians. This is a particular issue for our many elderly residents who often have mobility issues and/or visual impairment. These people will be terrified by sharing a pavement with a design speed for 30 kph two way cycle traffic.

LTN1/20 6.5.4… Shared use facilities are generally not favoured by either pedestrians or cyclists, particularly when flows are high.
It can create particular difficulties for visually impaired
people…

Safety issues caused by putting a cycle track onto these urban pavements will be worsened by the projects failure to adhere to either recommended or absolute minimum DfT cycle track widths. Indeed, it is hard to identify any elements of the Highways England proposals that meet current standards for walking and cycling or any preceding standard for walking and cycling introduced within the last 25 years.

Recent National policy on cycling and walking Gear Change has promised that:

Funding only schemes which meet the new standards (page31)

We will not fund or part-fund any scheme that does not meet the new
standards and principles described in theme 1 and in the Appendix. We
will not allow any other agency or body to fund such schemes using any of our money…

ChiCycle members and other stakeholders joined a virtual meeting with the WSP project manager for this scheme (email Paul Goodenough) on the 5th Feb 2021. Remarkably, Paul stated that there is no mandate for this project to abide by the standards and principals included in current Gear Change national policy on cycling and walking!

Please provide your insight into why this scheme in West Sussex is permitted exemption from UK DfT road safety standards and why the scheme is not required to abide by national policy minimum standards for cycling and walking.

Many thanks in advance for addressing our concerns over this matter, 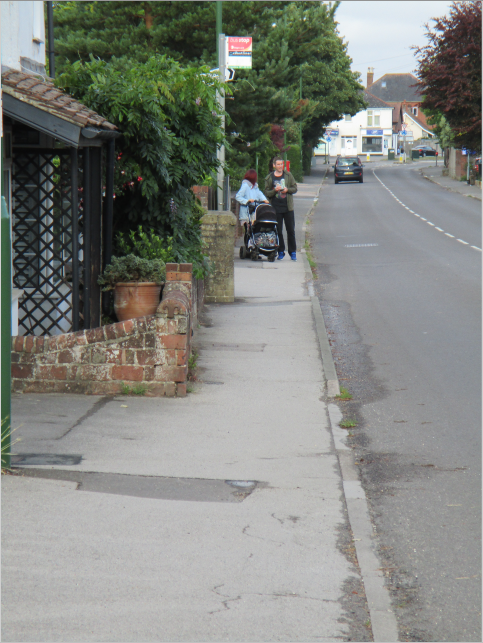 The image above shows Southbourne’s northern side high street pavement which is planned to be inappropriately converted into a  two way shared use cycle track.