Update… National Highways acknowledge they were looking at the wrong data. A response from Project Manager Adriana Chirovici is now copied at the end of the post below the horizontal line.

ChiCycle will shortly be writing to Highways England in the hope of correcting misrepresentations they have made in recent presentations.

On Friday the 5th of February 2021, ChiCycle members attended a virtual meeting hosted by Highways England about their proposed for an NMU scheme that intends to move cyclists onto shared pavements on the majority of the route between Chichester and Emsworth.

While presenting the NMU proposal Helen Littler of wsp.com claimed that traffic data indicates that Fishbourne Road East is a very quiet road where it is suitable for cyclists to share the road space with motor-vehicles. This is certainly not a justifiable assessment if current guidelines for cycle infrastructure are considered. Why have facts recorded by WSCC traffic count data been misrepresented in this way to local councillors and other stakeholders?

The most recent traffic data (publicly) available for this road was recorded in August 2009. Since this date there has been significant housing development along Clay lane that feeds onto Fishbourne Road East. Therefore, it is unlikely that typical traffic volume on this road will have declined since August/September 2009.

7.1.1 Where motor traffic flows are light and
speeds are low, cyclists are likely to be able to cycle
on-carriageway in mixed traffic, as shown in Figure 4.1.
Most people, especially with younger children, will not
feel comfortable on-carriageways with more than 2,500
vehicles per day and speeds of more than 20 mph.
These values should be regarded as desirable upper
limits for inclusive cycling within the carriageway.

Of the 33 days when full daily traffic data was recorded at Site Reference: C0123005L02 during 2009, only two dates reported vehicle traffic counts below 2,500 vehicles per day! Sunday the 9th Aug and Sunday the 16th Aug. This shows that during the period of this survey the traffic volume on Fishbourne Road East was only appropriate for cycling in mixed traffic on 6% of these days.

ChiCycle recommend that the project scope is significantly expanded to allow compliance with DfT guidelines and the current inadequate proposals are discarded. It seems reasonable to expect intervention on this route of a national cycle way so that minimum DfT recommendations are met. It is not credible to dismiss intervention on this cycle route where traffic volumes can exceed 5000 vehicles per day using the pretext that this is a quiet street.

Thank you in advance for accepting our guidance in how best to provide safe cycle infrastructure between Chichester and Emsworth. 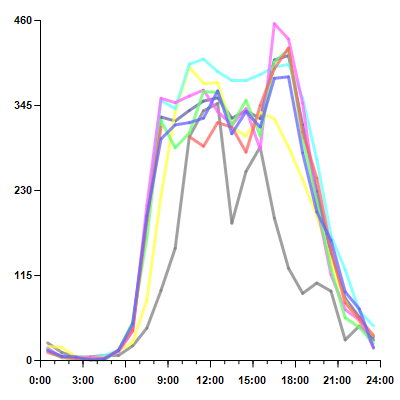 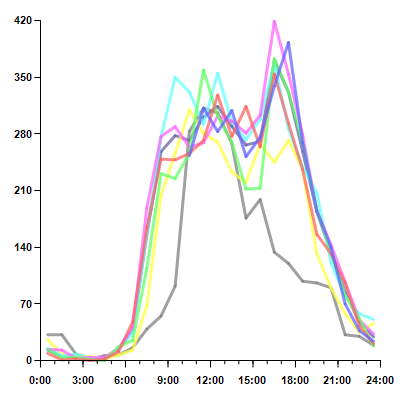 Areas on the chart indicating over 300 vehicles passing the counter each hour will have had on average more than one vehicle passing every 12 seconds. With cyclists competing for narrowed road space where cars are parked at the street edge, this is not a quiet environment allowing relaxed inclusive cycling.

Thank you for your email and apologies for getting back to you so late. I have taken your email into account and immediately looked into the matters raised but failed to get back to you soon after.

Your comments have been passed onto our colleagues in WSP and traffic data has been double checked again. The observation regarding the quiet road was made on the basis of two site visits in 2019 and one in 2020, and also 2009 (3rd to 19th August) data for ATC site 90004581. This suggested very low daily weekday flows (c.300), but indeed ATC site 00004581 that you quote in your email has been missed. This is located at exactly the same spot and covers the same period (and on to 10th September) and indicates average weekday flows of c. 4,300. We also acknowledge the housing development that has since taken place on Clay Lane. With all this in mind, I would like to reassure you that we plan to undertake new traffic counts in the next design stage and this won’t be overlooked to ensure information is captured accurately.

I trust the above addresses your concerns raised, but should you have any other questions or queries, please don’t hesitate to get in touch.