WSCC highways and CDC planning, claim that the West of Chichester Development Spine Road and its cycleway meet DfT (and several other) safety standards and guidelines.

ChiCycle members understand that guidelines are designed to give some degree of leeway but the limits of credibility have now clearly been reached!

Every UK cycling standard recommends against running cycleways along a pavements if they frequently need to cross side roads. Currently the plans for the 650 metres of spine road already have the cycleway crossed by 9 side roads! Presumably there will be even more side roads included as the development plans progress.  ChiCycle members have difficulty understanding how decisions like these can be viewed as a genuine attempts to follow guidelines.

There are numerous concerns over the plans for the Phase 1 West of Chichester development Spine Road. The ChiCycle position is that these shortcomings are so severe that it will be better to have no cycleway at all in this location rather than install the dangerous infrastructure currently proposed.

It is unrealistic to list every defect because there are so many. However, a few of the issues will be listed below, starting with those posing the greatest hazards to road safety.

It is generally accepted as hazardous to run a two way cycleway along a pavement and across the mouth of junctions. Every single UK cycle standard makes note of this!

National Highways DESIGN MANUAL FOR ROADS AND BRIDGES VOLUME 5
SECTION 2 (ASSESSMENT AND PREPARATION OF ROAD SCHEMES PREPARATION AND INFORMATION
Provision for Non-Motorised Users gives the following advise that cycleways should not be run over the mouths of junctions. It is recommended that they are set back from the road or run in the carriageway where they have to cross side roads. The explanation beginnings at paragraph 6.24; 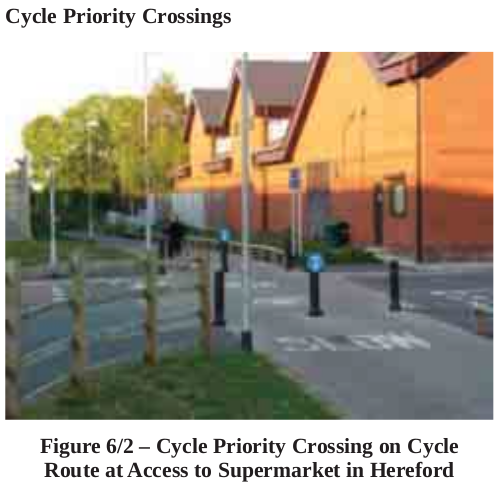 6.24 Cycle route crossings of roads are normally configured so that the road has priority over the cycle route. Where appropriate, the priority may be reversed by placing the cycle track on a flat-topped speed hump
and providing give-way markings on the side road (see Figure 6/2). All speed humps should be constructed in accordance with the Highways (Road Humps) Regulations 1999 (SI 1999 1025).

6.25 Where a cycle track runs alongside a carriageway, with poor sight-lines into the side road, the track and its side road crossing will need to be ‘bent out’ (deflected away from the carriageway). This is so
that motorists turning into the side road being crossed by cyclists can complete their turn and still have time to stop. It also helps prevent stationary vehicles obstructing the main carriageway when waiting at the crossing.

6.26 Alternatively cycle tracks may be ‘bent in’, moving the cycle track onto the carriageway across the mouth of the junction. However, this may require some junction treatment to narrow the road to provide
protection to the cyclist.

6.12 A common reason for taking cyclists off the carriageway is the perception that it will improve safety. However, it is important to understand that a shared use route will not necessarily be safer than an on-carriageway alternative. In particular, careful consideration is needed where a cycle track running alongside a road crosses a side  road – see Figure 6.1. At these locations, there is significant potential for conflict, which can sometimes negate the safety benefits of segregating cyclists from motor vehicles. Section 10.3 of LTN 2/08 discusses this in greater detail.

6.13 Where cycle tracks alongside roads accommodate two-way flow, the potential for conflict can increase significantly. It is probable that drivers are less likely to expect cyclists to come from both directions because, intuitively, they might assume cyclists would be travelling in the same directions as traffic in the adjacent part of the carriageway – see Figures 6.1 and 6.2. 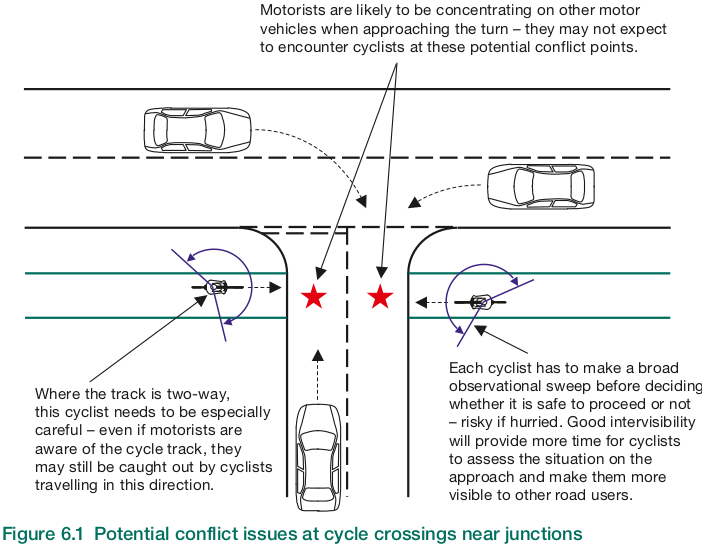 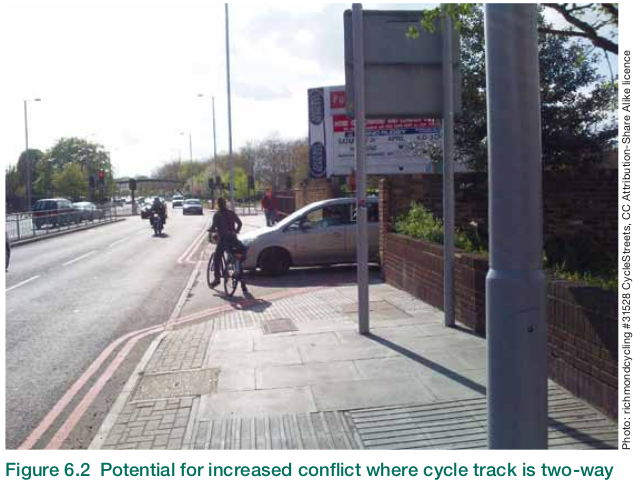 Junctions do not comply with London Cycling Design Standards including section 3.5.3 as the Developers had Promised

It is important to understand that LCDS guidelines do not suggest that the pavement is shared with cyclists at raised junctions as was implied by the developers! Indeed the LCDS guidelines direct designers to document LTN 1/12-Shared-use-routes-for pedestrians-and-cyclists which specifically highlights the danger of two way cycle traffic on shared tracks, parallel to roads, particularly where there are frequent side road junctions. See LTN 1/12 section 6.13 (page 22)

The LCDS guidelines for raised tables at side junctions, are identical to design advice previously given at meetings to Miller Linden developers by Chichester District Cycle Forum. We are highly disappointed at the developers failure to follow the LCDS guidelines as promised.

A diagram of the LCDS -3.Cycle-friendly streets and spaces (page 41) suggested layout using raised tables is shown below. 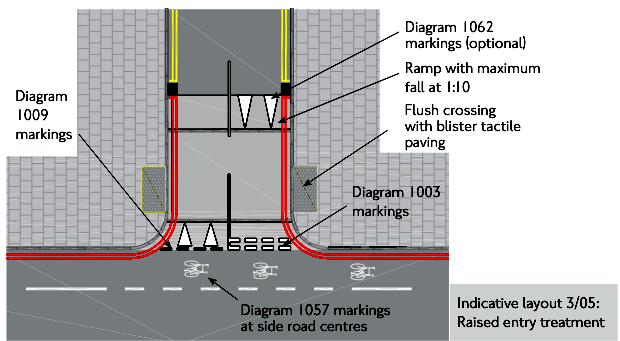 The concept is illustrated with an image from Copenhagen. Notice that the cycle lane is separate from the path following LCDS guidelines for raised tables at side junctions. Image shown below 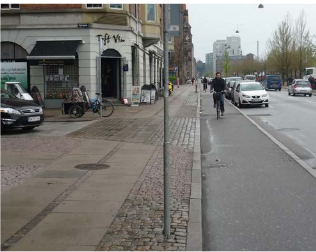 LCDS-chapter5 (Junctions and Crossings) gives a fuller explanation of how raised tables can be incorporated to enhance pedestrian and cycle safety at junctions with a two way cycleway.

An image of the LCDS recommended layout for a two way cycleway is shown below. Indicative layout 5/07: Two-way cycle track with priority over side road, showing options for pedestrian crossing of cycle tracks (page 25) 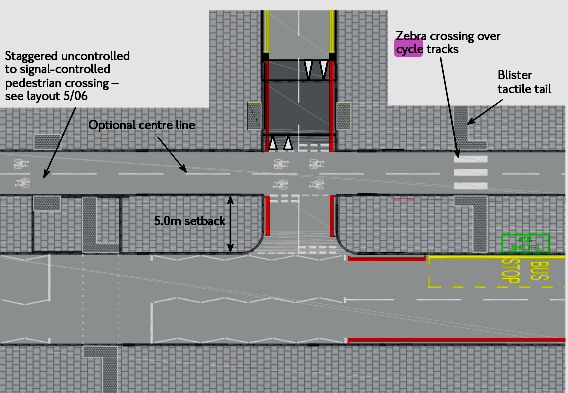 The District Cycle Forum has modified the Miller Linden plans to illustrate how the LCDS recommended layout for a two way cycleway could be implemented on the spine road. Image shown below. 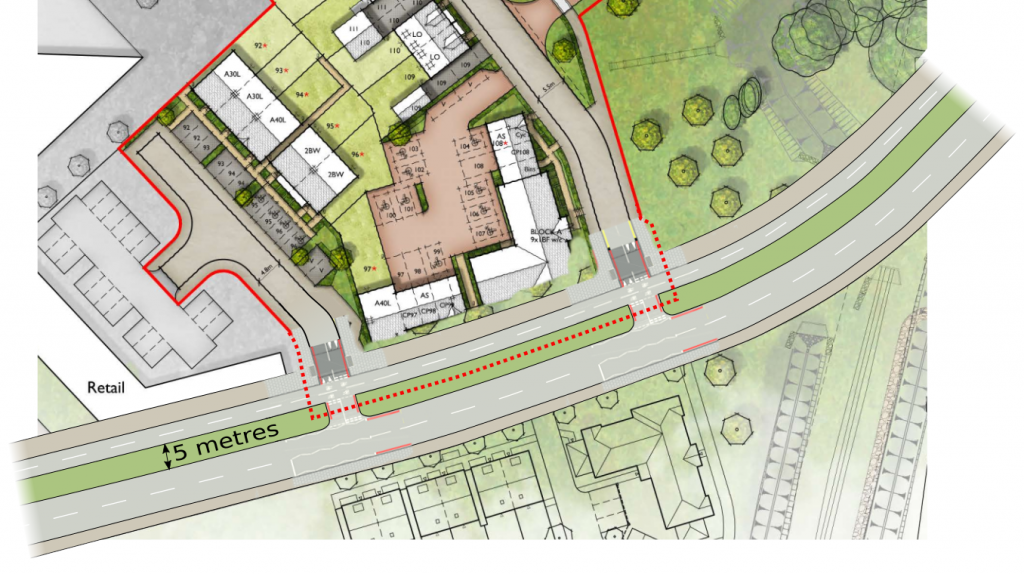 Chichester cycle forum members understand from Sustrans that this design is an inappropriate choice in this situation. the design is not suitable as a shared use cycle track along a residential development spine road.  Tracks alongside roads are better suited where road carry high speed traffic with only occasional side roads and particularly in rural settings away from urban areas.

The recommended road markings suggest an urgent review of visibility splay analysis is needed at the planed road junctions.
From page 21, the reader is guided to advice about shared paths.

The Shared use routes alongside the carriageway are more likely
to justify segregation between cyclists and pedestrians,
in which case there are particular advantages in providing
one-way cycle tracks on each side of the road.

Splay analysis shows whether road users have adequate visibility to proceed safely. Details can be found in section 7 of the DfT Manual for Streets.

Forward visibility of the carriageway from this junction gives a Y distance of only 15 metres (for a 30 MPH road it should be 43m). According to DfT this is only adequate if the traffic speed on the spine road is 15 Mph or below. Forward visibility of cyclists would only be satisfactory if their speeds remain below 10 Mph.

It is also of concern that developers splay analysis states compliance with DfT visibility criteria will rely on peoples front gardens having fencing, shrubs and hedges that must remain under 600mm (24 inches) in height.

Landscaping & any External Works Fencing (i.e. Picket Fencing within property curtilage) to be kept below 600mm in height where located within visibility splays.

A brief survey around the Chichester area should quickly confirm that most residents choose taller planting and landscaping in their front gardens. Very few popular hedges or shrubs will be happy to be pruned down to 600mm (24 inches) in height!

DfT Guidelines Indicate the Northern Spine Cycle Way is Not a Viable Alternative to Travelling by Motor Vehicle to Work, Facilities and Services

Chichester Cycle forum do not recognise this two way cycleway running on a pavement shared with pedestrians and frequently crossing side roads, as a viable cycle commuter route. The DfT share the same view and explain that a shared pavement is an inappropriate location for this type of commuter route.

8.2.3 Where cyclists share a route with pedestrians, a lower design speed may be required. Routes with design speeds significantly below 20mph are unlikely to be attractive to regular commuter cyclists, and it may be necessary to ensure there is an alternative on­ carriageway route for this user category.

The width of the shared cycle track is inadequate along its entire length failing to meet DfT, TfL nor Sustrans recommended widths. Furthermore, at side road junctions the width is so constrained that the Chichester Cycle Forum consider it dangerous and unsafe.

The Junction into retail/shop area is unfriendly for pedestrians crossing the side road. 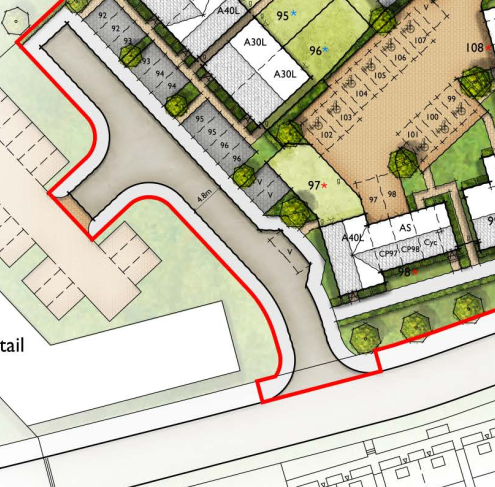 This junction is inadequate because there should be dropped kerbs to ease pedestrians crossing at the side road.

The plans have apparently dropped the all pretence of there being a continuous and convenient cycleway at this location!

If the existing planned geometry of the spine road, pavements and junctions cannot be altered at this stage, the Chichester cycle forum strongly recommend that a cycles must not be routed along this North West pavement as it will prove dangerous and unsafe for all road users. In this case some other solution should be found that would promote utility and commuter cycling. The DfT recommend lowering traffic speed to benefit cycle safety and one possibility is to introduce a 20 is Plenty scheme along the spine road.

The Chichester Cycle Forum believe a better approach is a thorough redesign followed by a cycling provision quality audit to ensure adherence with DfT and West Sussex County Council guidelines. The most realistic solution will be to provide 1.5 metre on carriageway cycle lanes either side of the spine road. This is generally accepted as the best solution where there are frequent side roads on residential development spine roads.