National Highways have launched their public consultation on proposals for the A27 Grey Route Arundel Bypass strategic road network expansion scheme. The the consultation web-link is available as follows: https://a27arundelbypass.consultation.ai

The consultation website explains: All responses must be received by 11.59pm on Tuesday 8 March 2022. Responses received after that date may not be considered.

A PDF copy of ChiCycle’s position on the grey route scheme is available on this link.

The best way of responding to the consultation is to write or send an email to:

Stop the Arundel Bypass! group also give very good advice on how to respond to the questionnaire available on this link.

ChiCycle oppose the A27 Grey Route for the following reasons

National Highways estimate the Arundel Bypass construction costs will be between £320 and £455m but these estimates appear only to be lower bounds with costs likely to rise between £508m and £545m according to recent news reports. These higher costs will leave the project yielding a negative return on investment (BCR rate) of 0.52-0.56, meaning the costs will be almost double the proposed benefits.

In March 15th 2015 National Government published a Cycling and Walking Business Case Summary and based on the decongestion benefits alone, typical cost benefit (BCR) ratios for delivery of good quality walking and cycle schemes are estimated to be 4.5:1. The United Nations Environment Programme reports that “each kilometre of bicycle use yields a social benefit of US$0.77, whereas cars and buses cost society US$0.42 and US$0.33 per kilometre, respectively“.

Although West Sussex currently has extremely limited provision of viable quality cycle infrastructure, there remains strong evidence that investment in cycling infrastructure is of significant social benefit and would stimulate the local economy. By contrast, the cost of the Arundel Bypass Grey Route will most likely be a net economic drain.

The A27 bypass consultation makes no analysis of the schemes economic benefits in comparison to the likely economic returns from similar investments supporting alternative (more sustainable) modes of transport. Instead, only nebulous assurances are given suggesting the scheme might relieve “pockets of deprivation” by improving “transport connectivity”, perhaps by giving “better access to employment opportunities”. Despite these assurances, no details are given of the location of the supposedly understaffed industries. Neither are locations given of where potential workers live in deprived areas while currently being unable to commute to otherwise suitable places of employment. No explanation is given why the scheme’s money would not be better invested in either, relocating understaffed industries to areas where potential workers reside, or alternatively to provide affordable housing closer to the centres of employment. It is also also claimed “The Scheme would support planned growth within Arun District” but no analysis is given that explains how and why local industries might depend on the Grey Route in order to achieve economic growth.

Surly this kind of public expenditure (likely to exceed half a billion pounds) ought to be justified by rigorous, rational, scientific, evidenced based arguments. However, this consultation gives no reasoning why this expansion of the trunk road network should be prioritised while alternative modes of transport, with far stronger social, environmental and economic justification, are all being starved of investment.

Documents presented within the A27 Arundel bypass consultation claim the scheme is necessary to resolve severance issues experienced by non motorised road users. However, other consultation documents display evidence that contradicts this claim.

The Preliminary Environmental Information Report Volume 2a includes a section (2.1 Need for the Scheme). This states the following under paragraph 2.1.5:

2.1.5) The Scheme would also help remove the severance issues experienced
specifically at Arundel in the area of Ford Road roundabout, but also
more generally as a result of the constraints for motorised and non-
motorised travellers when travelling north-south across the A27 corridor
at Arundel.

However, the A27 Arundel Bypass Statutory Consultation Brochure explains (on page 36) that the majority of existing traffic will continue to use the de-trunk-ed A27 road section between the Causeway and Ford Road roundabout at Arundel! It is projected a whopping 20,500 motor vehicles per day will continue to drive this section of the old A27 road, even after completion of the Grey Route.

To put this volume of traffic into context, in 2019 sections of the M45 saw average daily traffic flows of 13,388 vehicles. That level of motorway traffic on the M45 is only 65% of the traffic volume National Highways predict for the de-trunk-ed A27 sections running past Arundel Station and at the Ford Rd roundabout once the bypass is completed in 2027!

It is self evidently unreasonable to expect school children and/or commuters to ride on an A road carrying 153% of the traffic volume seen on a UK motorway! In these circumstances, how can National Highways make any claim the Grey Route will help remove community severance issues and support viable active travel for Non-Motorised-Users?

Indeed, DfT LTN1/20 section 7.1.4 of the current national guidelines on cycle infrastructure design states that “…At flows of above 5,000 vehicles per day few people will be prepared to cycle on-street”. The De-Trunk-ed existing A27 is projected to carry over eight times the recommended upper limit of 2,500 motor vehicles per day considered suitable for cyclists to share space with motor-vehicles on the carriageway even in a 20 MPH zone. LTN1/20 section 7.1.1 states “Most people, especially with younger children, will not feel comfortable on-carriageways with more than 2,500 vehicles per day and speeds of more than 20 mph.”

Unlike the Grey Route, the Arundel Alternative proposes a realistic transport intervention that could includes viable, high quality walking and cycling infrastructure. The Arundel Alternative solution provides a short bypass with grade separation of A27 traffic over Ford Road. It would offer a practical solution to north-south community severance where it is currently extremely difficult for pedestrians and cyclists to cross Ford Rd roundabout. This solution also alleviates the need for motor traffic to continue using the Causeway past Arundel Station as a through road. The Arundel Alternative would allow the use of modal traffic filtering on the Causeway in a fashion recommended on pages 17,18,19,42 & 47 of Gear Change (the National Cycling and walking plan for England). This would create an appealing low traffic neighbourhood between Arundel town centre and its station which would strongly promote sustainable walking and cycling habits. Turning the Arundel Causeway into a low traffic Cycle Street would allow the establishment of a cycle hire shop at Arundel Station, drawing in tourists wanting easy access to the wetland areas without the inconvenience and congestion issues associated with arriving by car.

Thoughtful transport network interventions such as the Arundel Alternative would significantly improve the Arun area for tourism as well as for residents, through reallocating road space towards walking and cycling. Unfortunately, the Grey Route fails to offer any improvements that could genuinely support walking and cycling in Arundel.

(3) The Scheme Fails to Meet its Promise to Improve the Community’s Access to Services. The Grey Route will Bring Walberton Village a 42% Increase in Motor Vehicle Traffic!

The Sussex Express reports that Walberton residents have major concerns over the estimated 1,300 additional vehicles that will try to ‘navigate the narrow main street’ of Walberton, per day, and pass the two entrances to the school and play centres. The following image shows motor vehicles already often mount the villages high-street pavement when there is not enough room for wide vehicles to pass.

However, the A27 Arundel Bypass Statutory Consultation Brochure promises (on page 8) that a key objective of scheme is:

By reducing congestion on the A27 and the local road network,
the Scheme would improve the community’s access to services
in the local area.

It is also difficult to understand how the National Highways proposed increase in traffic through Walberton (increasing up to virtually 5,000 vehicles per day) can be reconciled with the vision that “every child is confident and safe walking or cycling to school” from page 12 of Gear Change (the National Cycling and walking plan for England).

Members of Stop the Arundel Bypass Alliance have correctly pointed out that “The Street has numerous areas without pavements and is already dangerous for pupils and their families, as vehicles often mount the pavement as they try to pass each other along this, often single track, road. Walberton Pre-School and Nursery also share a deep anxiety that this ill-thought out plan will result in inevitable injuries or deaths to children trying to get in and out of their education/play centres.

The scheme will obviously hugely fail in its stated promise to “Improve accessibility for all users to local services and facilities”!

With over 700 million passenger journeys per annum made on Southern region trains, many peoples first impressions of the Sussex Coast are often made from the train as it crosses the Arun flood plain. The vista from the railway is wonderful and instantly recognisable with the South Downs rising up from the coastal plains where Arundel Cathedral and Arundel medieval Castle stand out as impressive historical monuments.

Many rail travellers including myself, will feel a painful sense of loss and despair each time they travel this route once this vista is permanently blotted out behind the brutal A27 bypass concrete monstrosity.

The scheme will obviously hugely fail to meet its promise to “enhance the quality of the surrounding environment”!

The UK transport sector is our largest contributor to greenhouse gas emissions. This is detailed in the Department for Business, Energy & Industrial Strategy 2019 UK Greenhouse Gas Emissions, Final Figures released 2nd Feb 2021 and includes the following charts and data. 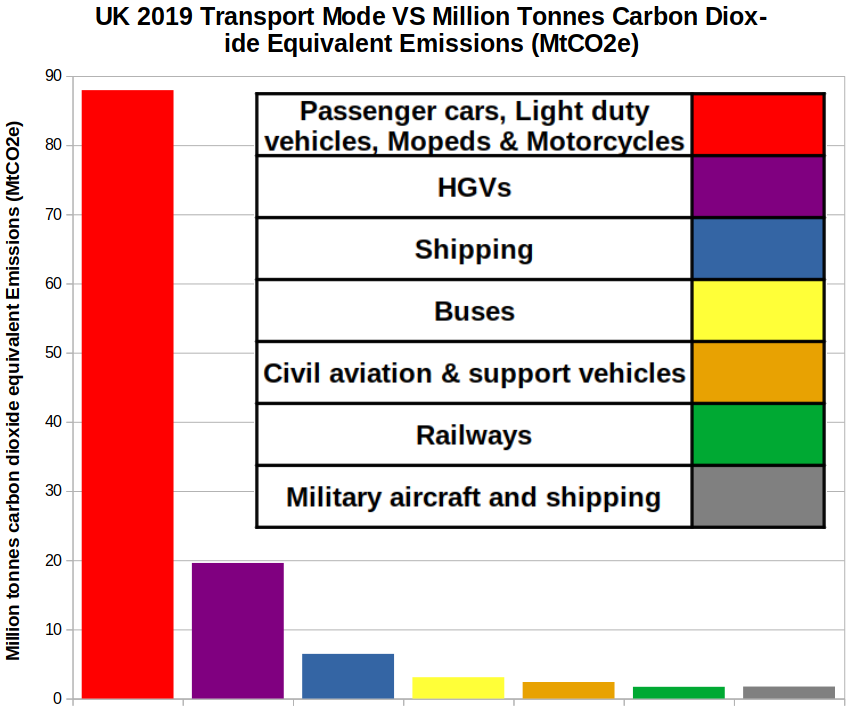 National Highways rely on electric vehicles becoming net carbon zero to achieve 2050 targets stated on page 19 of the Road Investment Strategy 2020/2025. This is an unrealistic expectation because although electric vehicles may be zero emission at the tail-pipe, the energy they consume is produced elsewhere (most likely from gas fired power-stations). This usually results in similar (although slightly reduced) emissions being emitted where the electrical power is generated. Electricity generated from renewable sources in the UK in 2019 was only 37.1% of total UK electricity generation according to government published digest of energy statistics. Electrifying all motor vehicles on the road network would need at least double the electricity generating capacity currently available in the UK. It would requiring 5.4 times the current capacity for generating the required renewable electricity. Compounding this issue is National Highway’s ambition to further increase motor vehicle dependency by encourage people to live away from where they work. This policy objective is outlined on page 10 of the on Road Investment Strategy 2020/2025. Further increasing traffic volumes on the strategic road network makes it even more improbable motor vehicles using the Strategic Road Network could ever be powered sustainably.

The Government Statistics for the UK transport sector emissions includes neither the carbon cost of construction and maintenance of the road network nor the carbon cost of manufacturing and maintaining motor-vehicles. Manufacture of electric vehicles typically releases vast quantities of greenhouse gasses and Road Investment Strategy 2020/2025 entirely fails to address this serious issue.

Greta Thunberg’s denunciation of ‘Fairy Tales of Eternal Economic Growth eloquently sums up the situation. There is simply no excuse for pretending expanding the strategic road network is a realistic pathway towards carbon neutrality. Motor vehicles using the strategic road network are one of the UK’s main contributors to green house gas emissions. Reducing dependency on private motor vehicles and rapidly moving towards sustainable transport modes such as travel by walking, cycling and public transport, is the only reasonable way to address the urgent climate crisis issues.

The A27 Grey Route Bypass is economical unjustifiable. It offers no advantage to those who walk and cycle in Arundel and creates a hostile environment for residents in Walberton.

Please lets stop the insanity of continuing with this project and invest the money into something more environmental responsible that would be worthwhile to the local community.

Mark Record on behalf of ChiCycle