Schemes are being introduced that threaten to reduce the standard of cycle provision through Westgate. ChiCycle hope to initiate a conversation between the cycling community and local residents. We hope this can lead to a mutual understand of our aspirations towards local highway improvement schemes. ChiCycle cannot speak for all local Cyclists but we feel we can make some useful generalisations.

The following video clip (for Westgate section skip to 03:05) highlights the existing speed and convenience utility/commuter cyclists enjoy when cycling into the City from West of Chichester.

Cyclists Must Not be Forced onto a Shared Pavement along the Southern Access Road.

A stepped cycle way along the entire Southern Access Road, all the way to the Sherborne road junction, is the minimum standard ChiCycle can accept.

A Design Speed of 20Mph or 30kph is Required

Commuter/Utility cyclists wish to use their bicycles as a fast efficient transport. Speeds up to 20 Mph are realistic and infrastructure needs to safely enable this without causing conflict with other road users. These speeds are recommended in all current UK cycle standards for main route cycleways.

Any Cycle-way Needs to be Set Back at least 2.5 metres from Highway Boundary

Westgate  has many walls and hedges bordering its pavements. A poor design decision would be to run a cycle-way along either pavement because this will leave residents with inadequate visibility when exiting driveways. The cycle lane/tracks need to be at least 2.5 metres inside the road’s boundary so residents can adequately see approaching cyclist from their driveways before pulling out (or walking out) into fast moving cycle-way traffic.

A Shared Path is Not Recommended

Bicycles are virtually silent but this can cause problems if cyclists are made to share road space with pedestrians. A successful cycle scheme will attract a large increase in cycle traffic. Many near silent, fast moving cycles approaching in both directions may produce an unpleasant and stressful environment if cyclists share space with pedestrians. ChiCycle recommend preserving the existing pavements for pedestrian use only.

ChiCycle would warmly welcome cycle lanes or stepped tracks as shown above. It is likely this solution would only fit where the street is wide. It is unlikely there is enough room for this solutions along the narrows even if parking is removed. This solution would require removal of parking if it is installed and this change might not be popular with all residents. A “quiet” street arrangement might offer a better solution to cyclists and residents alike. 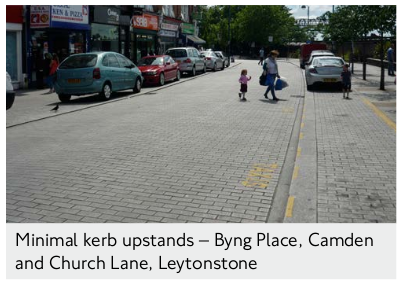 ChiCycle favour the option of reducing traffic flow along Westgate to provide a safe place for cyclists to ride. An advantage is segregation from motor vehicle traffic would not be needed. This could allow a more elegant and uncluttered street scene. This will also allow residential parking to remain. However it is difficult to see how traffic volume could be brought down to low enough levels to make cycling appealing without blocking the road to through motor vehicle traffic. Not all Westgate residents may favour the option of restricting through-way traffic flow along the road.

Solutions that require cyclists to join pedestrian footways by mounting kerbs, to then wait at crossings, will not be welcomed. The appeal of cycling is it is a quick easy way to get around. On standard carriageways, cycles have equal priority to motor-vehicles. Schemes that prioritise motor-vehicles by introducing additional delay and inconvenience for cyclists are unlikely to be successful.

The S106 plans for WoC phase 1 show plans for the Sherborne-Rd/Westgate junction. It is not clear what the orange lines represent but ChiCycle wish to be clear that we do not believe this design could ever form part of a viable cycle network or route.

The London Cycle Design Standards which are often also considered best practice outside of London, state:

A well designed smart traffic light controlled junction at the Westgate/Orchard-St  interchange could be a viable solution for cyclists. Advanced Stop Lines would allow a priority advantage for people cycling across this junction.

These style of traffic light controlled junctions have been employed in London so are already part of the UK traffic scene.

Another alternative might be to have a Dutch style roundabout but these are still experimental in the UK. However, ChiCycle members who have visited the Netherlands have been very impressed by them. 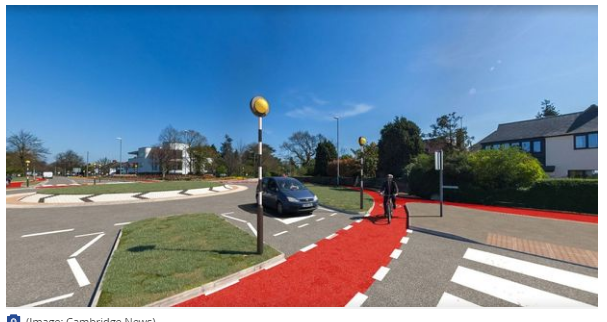 A traffic light controlled junction with advanced Stop Lines for cyclists would be a huge improvement for cyclists over the low standard S106 plans!

However, if the Southern Access Road meets Sherborne Rd using this arrangement, additional methods would be needed to filter motor vehicle traffic to prevent Westgate being used as a through way.

Space needed for cyclists is frequently underestimated. The majority of the Chichester to Emsworth route should follow DMRB CD195. Westgate is not a trunk road so this specification does not strictly apply in this situation. However, there should be continuity of provision along the route so there is a good argument for using the same standard throughout. Moreover, the other standards offer similar advise but are more difficult to follow.

All current UK cycle standards require additional width allowances for cyclists where there are vertical features adjacent to the lanes/tracks.  CD195 example:

CD195 does not cover or recommend the use of shared use paths! It gives the following recommendations for cycle lane and track widths. 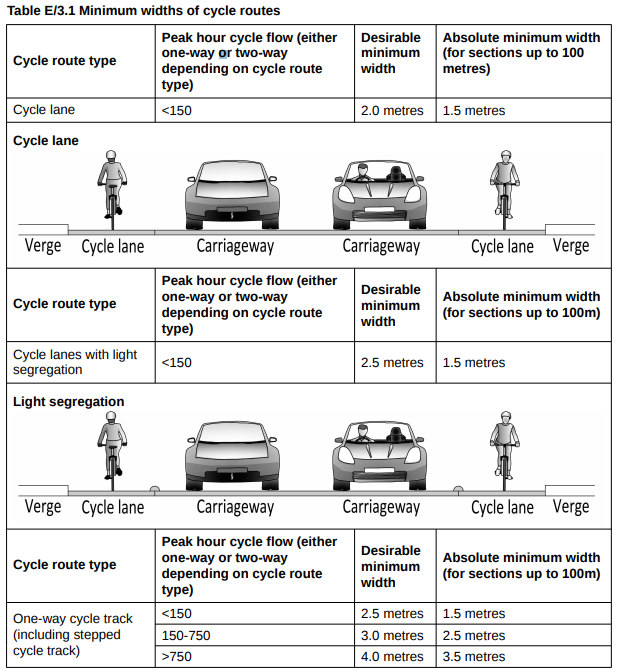 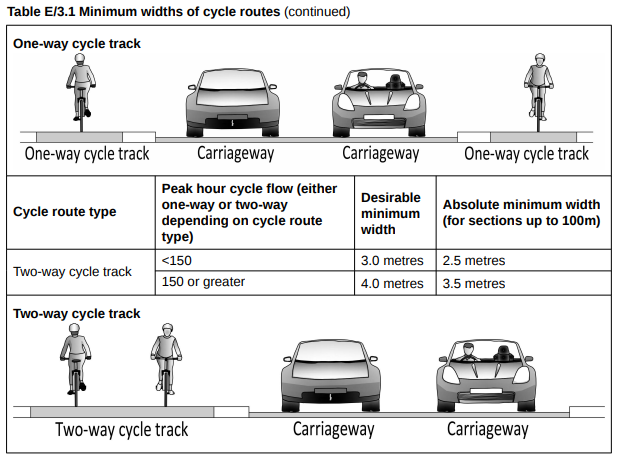 ChiCycle hope our aspirations will guide decisions to enable a successful cycle network to grow in Chichester. Please leave comments below the line so we can modify our advice to better follow the consensus of opinion held by all local cycle users.