Developers have proposed that the pavement shown to the north east side of the spine road could be designated as a shared use path carrying both pedestrians and two way cycle traffic.

9.1 Visibility criteria at junctions and crossings

9.1.3 The circumstances are different at a cycle track junction–for one thing, the speeds involved are lower. In this case, longer X distances are preferred, as they can reduce cycling effort and may enhance safety. ~~~~~~~~~~~~~~~~~~~~~~~~~

Y distance is given from the table below from DfT Manual for Streets page 91.

22 metres is appropriate for Y as the DfT recommend a 20 mph Cycle-way Design Speed for routes intended predominantly for utility cycling. Cyclists commuting towards Chichester Station travelling South East, will be running on a significant down hill incline and will easily be able to achieve 20 mph.

DfT Manual for Streets page 93 gives an examples of Splay Analysis and an appropriate example is shown in the image below. 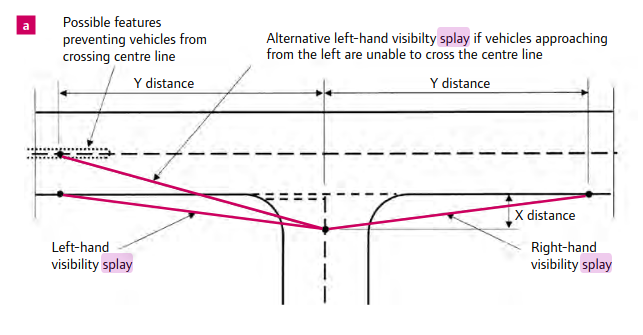 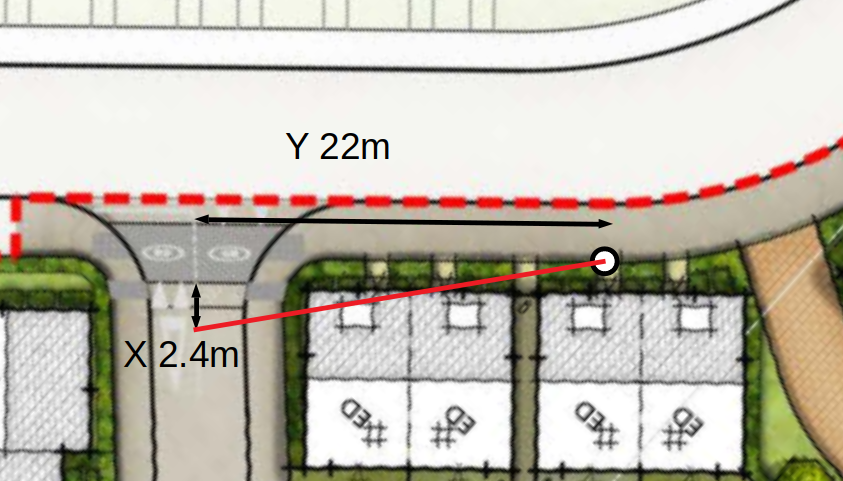 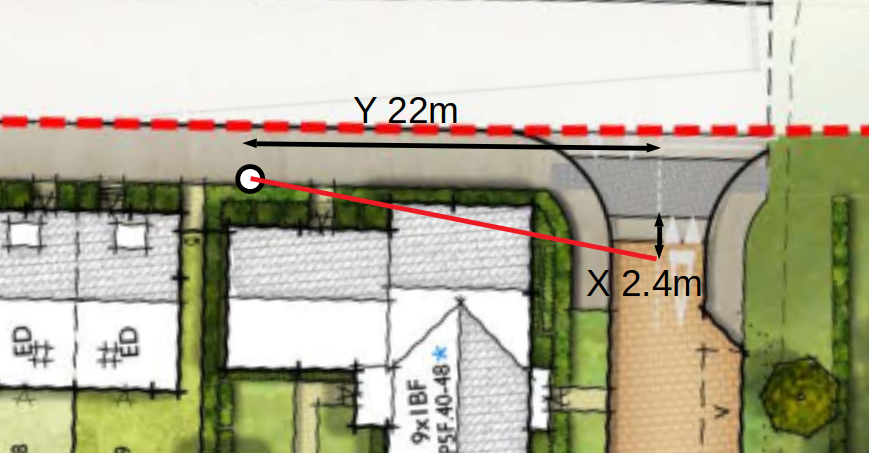 Developers have Submitted Splay Analysis that Ignores Visibility of Cyclists

A section of this drawing is shown below. 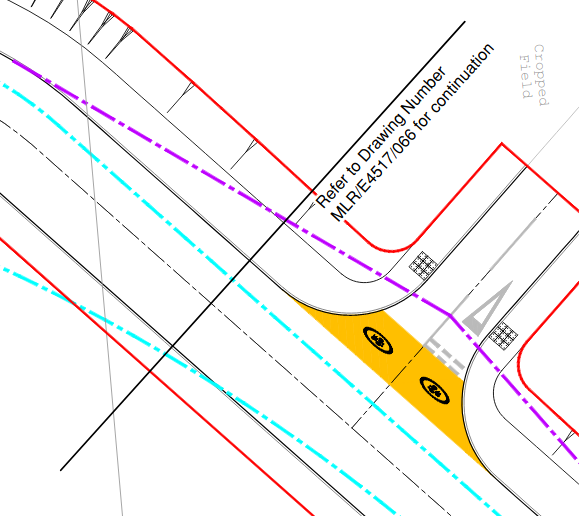 Notice that the splay lines do not include the cycleway that motorists will need to see clearly in order to give way to cyclists who are intended to have priority.

Part of the drawing key is shown below 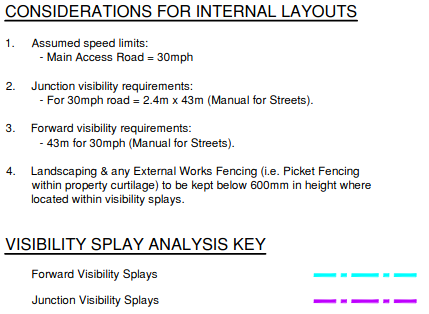 Although it is usual to analyse viability splays that align with the main axis carriageway kerb, this will clearly not be appropriate in this case because cycle traffic has been diverted onto the pavement and motor vehicles are intended to give way to the cyclists at the side road junctions. It will not be possible for motor vehicles to give priority to cyclists unless it is made possible; for the cyclists to be within the drivers visibility spay.

7.7.3 The Y distance represents the distance that a driver who is about to exit from the minor arm can see to his left and right along the main alignment. For simplicity it is measured along the nearside kerb line of the main arm, although vehicles will normally be travelling a distance from the kerb line. The measurement is taken from the point where this line intersects the centreline of the minor arm (unless, as above, there is a splitter island in the minor arm).

9.1.1 Where a cycle track meets a road, visibility splays are required to ensure cyclists can see and be seen by approaching motorists.

Clearly it is vital for everyone safety that there is adequate visibility provided at side road junctions so that cars do not pull out in front of the cyclists who have right of way.

It is also of concern that developers splay analysis states compliance with DfT visibility criteria will rely on peoples front gardens having fencing, shrubs and hedges that must remain under 600mm (24 inches) in height.

Landscaping & any External Works Fencing (i.e. Picket Fencing within property curtilage) to be kept below 600mm in height where located within visibility splays.

A brief survey around the Chichester area should quickly confirm that most residents choose taller planting and landscaping in their front gardens. Very few popular hedges or shrubs will be happy to be pruned down to 600mm (24 inches) in height!

The Cycleway Width will be Constrained at Junctions.

At the mouth of the junctions is a traffic calming feature. Its start and finish has inclines leading to a level “table” section in its middle part. Because the level “table” section is offset from the pathway, cyclists will have to hug the side of the pavement furthest from the kerb when transitioning onto the table to cross the side roads. It is presumed the transition between pavement and the inclined sections of the traffic calming will not be flush. This issue is illustrated in the image below.

Minimum Path Width Should be 3.45 Metres because Path is Bounded by Shrubs, Hedges and a Kerb

On page 42 it gives the following guidance on path widths for off-road cycleways.

8.5.1 The minimum widths given in this section relate to what is physically required for the convenient passage of a small number of users. They do not take into account the need for increased width to accommodate larger user flows. Wherever it is possible, widths larger than the minimum should be used. Practitioners should not regard minimum widths as design targets.

On page 43 the guidance on path widths continues.

8.5.3 Where there is no segregation between pedestrians and cyclists, a route width of 3 metres should generally be regarded as the minimum acceptable, although in areas with few cyclists or pedestrians a narrower route might suffice. In all cases where a cycle track or foot way is bounded by a vertical feature such as a wall, railings or kerb, an additional allowance should be made, as the very edge of the path cannot be used. Table 8.2 provides the recommended width additions for various vertical features. 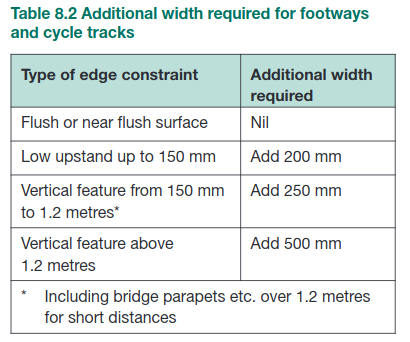 The shrubs and hedges that border the path at the junction are vertical features and should be taken into account as requiring additional path width. The same apples to the up stand kerb. The DfT guidelines suggest a minimum path width of 3.45 meters, whereas the usable width shown on the plans narrows to only two metres wide at side junctions (approximately).

Siting Properties with Shrubs and Hedges Immediately Bordering Cycleway Path Boundary gives Pedestrians Insufficient Visibility of Oncoming Cyclists. This issue is compounded by cyclists having to swerve into the mouth of side junctions to cross the traffic calming table. It is important to remember many footpath users may not be tall enough to sight approaching cycles over the tops of shrubs and hedges. The issue is illustrated in the graphic below.

It may be practical for a property entrance to be on a pavement but is it really a realistic proposal to have a property entrance on a cycleway with a design speed of 20mph? As discusses earlier, the cycles will often have to ride away from the kerbside and closes to house entrances to have a continuous flush surface for the wheels to run on. Chichester Cycle Forum members feel this arrangement may make both homeowners and cyclists feel uncomfortable.

18/01587/REM document MLR/E4517/058 STREET LIGHTING LAYOUT SHEET 4 OF 4 (A1) shows a street light layout and a diagram of how the lampposts will be positioned almost in the centre of the cycleway, less than 2 meters from the curb. The lamp-post positioning positioning diagram from the drawing is shown below. 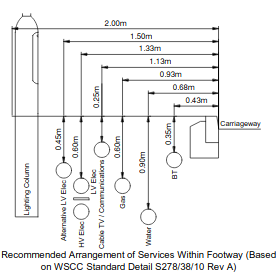 2.2.1 At low speeds, cyclists are prone to wobble and deviate from a straight line. For most cyclists, a speed of 7 mph (11km/h) or more is required to ride comfortably in a straight line without a conscious effort to maintain balance. Above 7mph, the amount of deviation, i.e. the additional width needed when moving, is 0.2 metres. Below this, deviation increases–at 3mph deviation is typically 0.8 metres (seeFigure2.1). Hazards such as uneven gully gratings may cause cyclists to deviate from their chosen line. Additional width for cyclists is recommended where such hazards exist. 2.2.2 For simplicity, the dynamic width (actual width plus deviation) of a cyclist on the road may be taken as 1 metre.

2.3.1 The following minimum clearances (Table2.1) are recommended and should be increased where possible. They are measured between the wheel and the object 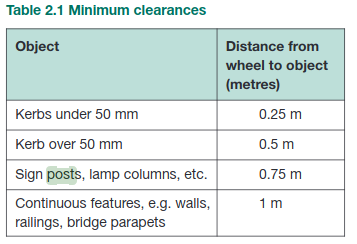 An illustration of the proposed lamp-post position in the cycleway is illustrated below.